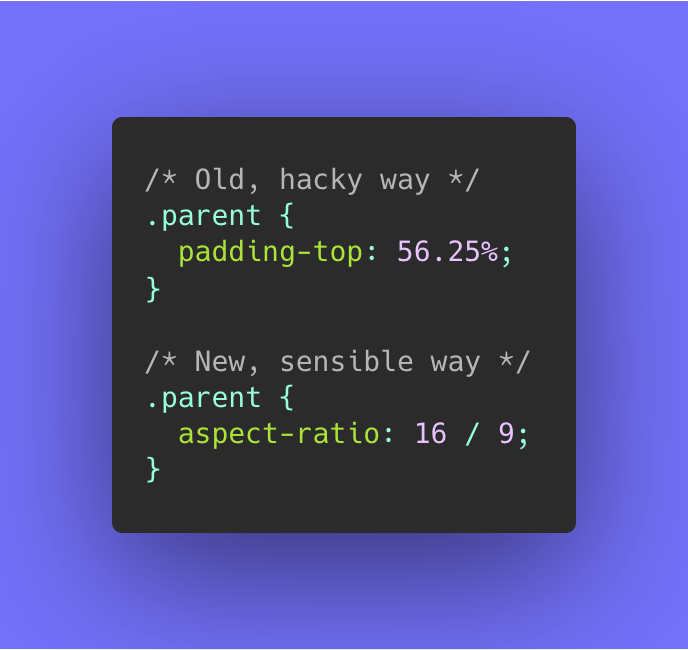 Back in May 2020 I was very delighted to read that the first Working Draft of the CSS Box Sizing Module Level 4 got published, as it featured an addition to CSS that I’ve been wanting for a long time now: native support for aspect ratio boxes through the new aspect-ratio CSS property.

With Chromium 89 (current Canary) and Firefox 85 (current Nightly) already supporting aspect-ratio unflagged, it’s time to start playing with this new addition and start thinking about dropping all those nasty hacks to mimic aspect ratios in CSS. Let’s take a look …

If you’re wondering about Browser Support, here’s an up-to-date list:

In short, the aspect-ratio property allows you to define a preferred aspect ratio on elements:

🤞 Psst, further down this you can find a demo that includes a fallback for browsers that don’t support aspect-ratio 😉

The value as set in the example above for aspect-ratio is of the <ratio> type:

Another allowed value for the aspect-ratio property — which also is the default — is auto. This indicates that the box has no preferred aspect ratio and should size itself as it normally would.

Depending upon which of width or height you set, the box dimensions will be calculated against that.

Setting an aspect-ratio won’t have effect on elements that have both a CSS width and CSS height set to a value other than auto. Only one of width or height can be explicitly set, and the other should remain set to auto.

In case one of the width and height should be set to a percentage based value such as 100%, the targeted box will take a look at the direct parent element’s dimensions to define its value upon that.

There’s some more edge cases here too, but let’s not get too deep into the spec 😉

Setting an aspect-ratio will tell the browser that this is a preferred aspect ratio. Should the content of the box be larger, then the box will simply grow.

To maintain the aspect-ratio, you can set overflow to auto so that a scrollbar will be shown should the contents be larger:

What also works, is setting min-height

Overriding the min-height property also maintains the 1:1 aspect ratio, but will result in content overflowing the box if it is not otherwise handled.

# Using aspect-ratio with a fallback for older browsers

Thanks to the powerful @supports it’s possible to add a fallback for browsers that don’t support aspect-ratio. In the demo below (based upon this demo by Una) a fallback using the padding-top hack is applied:

By introducing a CSS Custom Property it’s possible to make your code more generic and extract away a .aspect-ratio class.

To use it, add apply the .aspect-ratio on the element you want, and pass in a --aspect-ratio CSS Custom Property:

The code is written so that it will use the value for --aspect-ratio in both the fallback and the modern version.

When you embed an iframe you most likely set its width and height HTML attribute.

UPDATE: This once was proposed, but it’s not how it was implemented. Read this post to know how it actually works.

💁‍♂️ FYI: This is also what browsers nowadays do for images: they map the values from the width and height HTML attributes from images to a aspect-ratio in order to prevent Cumulative Layout Shift.

🐛 I’ve noticed that reading the width/height attribute values using attr() to pass them into aspect-ratio doesn’t seem to work in current Chromium. To cater for that I’m also passing their values by means of a CSS Custom Property …

After 8 years of wanting this feature to land in CSS (ref) I’m very happy to see this addition make it into the spec. It’s still a Working Draft right now, but that doesn’t stop me from being excited about it already. I hope you are too 🙂

📚 This post is part of a series called The future of CSS. More posts in this series: