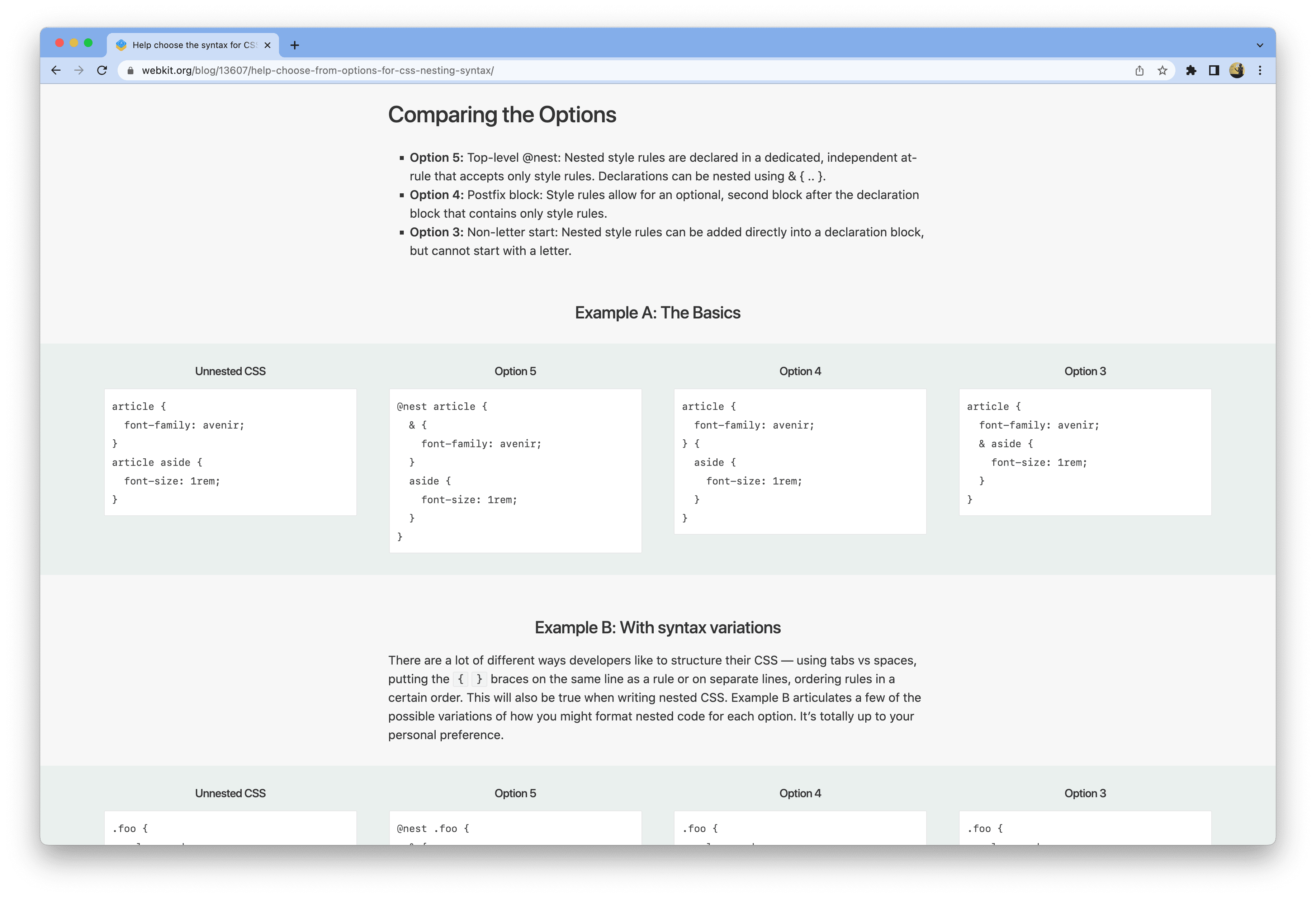 The CSS Working Group is continuing a debate over the best way to define nesting in CSS. And if you are someone who writes CSS, we’d like your help.

A while ago there was a survey on developer.chrome.com to help pick a syntax for CSS Nesting. After that survey ended, a few new syntax ideas have been floated within the CSS Working Group so there’s a new survey, this time available on webkit.org.

There are currently 3 proposals that you can choose from (taking over the order as they are listed on webkit.org):

Over at webkit.org, there’s a bunch of practical code examples using each of the syntaxes for you to review.

This is your time to be heard! Head over to webkit.org; after all examples you can find a block where you can cast your vote.

Cast your vote over at webkit.org →

Voting is easy and requires no registration or anything like that. Simply choose “Option 5”, “Option 4”, or “Option 3” and hit Submit.

# Why can’t we just do Sass-like nesting?

If it were that easy, it would have already been done 😉

As explained in the previous poll there’s a few reasons for this:

# No, but really, why can’t we just do Sass-like nesting?

The way CSS is parsed is strictly defined. The CSS parser works by reading a stream of bytes. While doing so, it needs to know what it is looking for. To allow this, it looks up to three code points to determine what it’s currently handling. Relaxing the lookahead to allow more characters would cause performance issues (CSS needs to be really fast) and could grow out of control as it’d need to be Infinite. Sass and other preprocessor are not bound by these limitations, as per note in the Nesting Spec:

Some non-browser implementations of nested rules do not impose this requirement. It is, in most cases, eventually possible to tell properties and selectors apart, but doing so requires unbounded lookahead in the parser; that is, the parser might have to hold onto an unknown amount of content before it can tell which way it’s supposed to be interpreting it. CSS to date requires only a small, known amount of lookahead in its parsing, which allows for more efficient parsing algorithms, so unbounded lookahead is generally considered unacceptable among browser implementations of CSS.

More info on parsing CSS in the CSS Syntax Specification and Chapter 6 of Web Browser Engineering.

# Does this mean we will never have Sass like nesting?
No. Just like the parent selector became a possibility over time, maybe we can have Sass-like nesting at an acceptable speed in the browser in the future. That day, however, is not today.
# What about no nesting?

CSS Nesting is the top requested feature by developers so we can’t ignore it.

But here’s the good news: if you don’t like it, you don’t need to use nesting. It’s entirely optional.

# That optional & is confusing in some of these proposals
It’s not that difficult when and when not to use to be honest. But if you do find it confusing, you can choose to always write the &. A linter can help enforce this across your team.
# What’s up with that numbering? Why 5-4-3 instead of 1-2-3?
There have been various syntax proposals. These are actually the 3rd, 4th, and 5th variations that are being presented. Proposals 1 and 2 are no longer considered by the CSS WG, so are not included in the poll.
# Why 5-4-3, and not 3-4-5?
Beats me 🤷‍♂️
# Is there a 1-page summary weighing all proposals?
This overview page of all proposals has a table showing all pros and cons for each. Note that proposals 1 and 2 are no longer considered.
# Which proposal do you like?

I don’t want to be accused of influencing the results here, so I’ll keep my opinion to myself. I formed my opinion by trying out the various syntaxes on some existing CSS I had laying around, and kept track whether if it was easy for me to do or not:

# How long does the survey run?
The survey will run until Dec 21, right before CSSWG meeting of that week.
# I can’t seem to vote – The page only shows me the results?!
Initially there were some caching issues going on with the page, but these should be resolved now. If you still run into this, try adding a random querystring (e.g. ?asfwe) to the URL.