UPDATE 2020.11.30: Aspect Ratios in CSS are no longer a hack, thanks to the new aspect-ratio CSS property!

Right now I’m in Amsterdam attending CSS Day (my fourth time already!). Earlier this morning Bert Bos and Håkon Wium Lie – yes, the inventors of CSS – were on stage reflecting on the first days of CSS and things they’d’ve done differently or turned out differently than they expected.

At the end of the talk the question came up if we, the audience, found if things were missing in CSS. Immediately aspect ratios came to my mind, as it’s something that has been bothering me for a few years by now, over, and over again (my first public musing about this dates back to 2012).

At last years’ Fronteers Conference it – for a short period of time – even became a hot topic after a demo using a spacer gif to creating aspect ratios was shown on stage. It created some outrage, yet my response to it was more nuanced:

Don’t bash the spacer gif or react, but bash the actual problem: there is no non-hacky way to work with aspect ratios on the web. #fronteers

Before going any further, let’s first take a look at the current hacks that exist to creating aspect ratios on the web.

A (hopefully) well known and longstanding hack to faking aspect ratios on the web is to abuse the vertical padding. By setting the height of an element to 0 and the padding-top or padding-bottom to a percentage based value one can force a box to have a fixed aspect ratio.

The reason to why this hack works is that the padding of an element is calculated against the width of that element (*).

The percentage is calculated with respect to the width of the generated box’s containing block, even for ‘padding-top‘ and ‘padding-bottom‘. If the containing block’s width depends on this element, then the resulting layout is undefined in CSS 2.1.

(*) The vertical padding isn’t always calculated against the width though, there is an exception … which you can read about here 😉

A generic implementation in CSS would be something like this:

You’ll need to wrap the content of .aspectratio in an extra element – a simple <div> will do – though, and sprinkle some extra CSS on top to position said element it properly inside .aspectratio:

Works fine in all browsers – even good old IE2 will do – but one must admit: it’s a hack, right?

If you’re familiar with CSS variables you can exchange the introduced data-ratio attribute from above with a CSS variable to define the aspect ratio to use:

See the Pen CSS Aspect Ratios, Technique #1b by Bramus (@bramus) on CodePen.

A similar yet somewhat different approach to the first technique is to dynamically inject some content using :after or :before, and then stretch that out:

Unlike the first technique, this technique doesn’t stretch out the .aspectratio element itself though. Only the generated content box is stretched out. This can make it quite nasty to style and rather impossible to center the contents both horizontally and vertically.

A technique I’m very fond of is to use viewport based units to hack together aspect ratios. It’s really great when you’re implementing full-width layouts, independent of the size of viewport (most typical designs for, say, blogs eventually limit the width of the main column).

On the upside you don’t need extra elements to wrap your content in, nor do you need to alter its position. On the downside however is the fact it isn’t very usable nor portable when things start shifting around or have different widths. Because this technique relies on explicit widths (eg. vw) instead of dynamic ones (eg. %), you’ll need to explicitly define the width/height per breakpoint and element.

This technique inherits the upsides and downsides of technique 3, but also re-introduces the extra element required to wrap around the content.

As already hinted in the title and introduction I find these techniques hacks and would like to see a proper, non-hacky, way to implementing aspect ratios on the web.

The ideal technique would involve best parts of all ones mentioned above:

A to me ideal syntax would be something along these lines:

Researching upon this topic it came to my attention that Tab Atkins started writing a proposal for this back in 2012, suggesting a likewise syntax. In it he highlighted a case where things would start to become fuzzy. What if you were to specify both the width, height, and aspect-ratio but with a wrong aspect-ratio for that width/height combination?

Given the issue above, another syntax that would please me (and bypass the issue along with that) is this:

Since you can’t set the height to a fixed unit, no extra calculations would need to be done. Of course you’d run into problems when setting both the width and the height to aspect-ratio(…), but that can be specced out: only the last one defined will be used, the previous ones will revert to auto.

On Twitter it was also pointed out to me that there’s a WICG repo on the issue. Greg Whitworth from Microsoft participates in the repo. The repo contains a link to a spec entitled Logical sizing properties which is also edited by Tab. 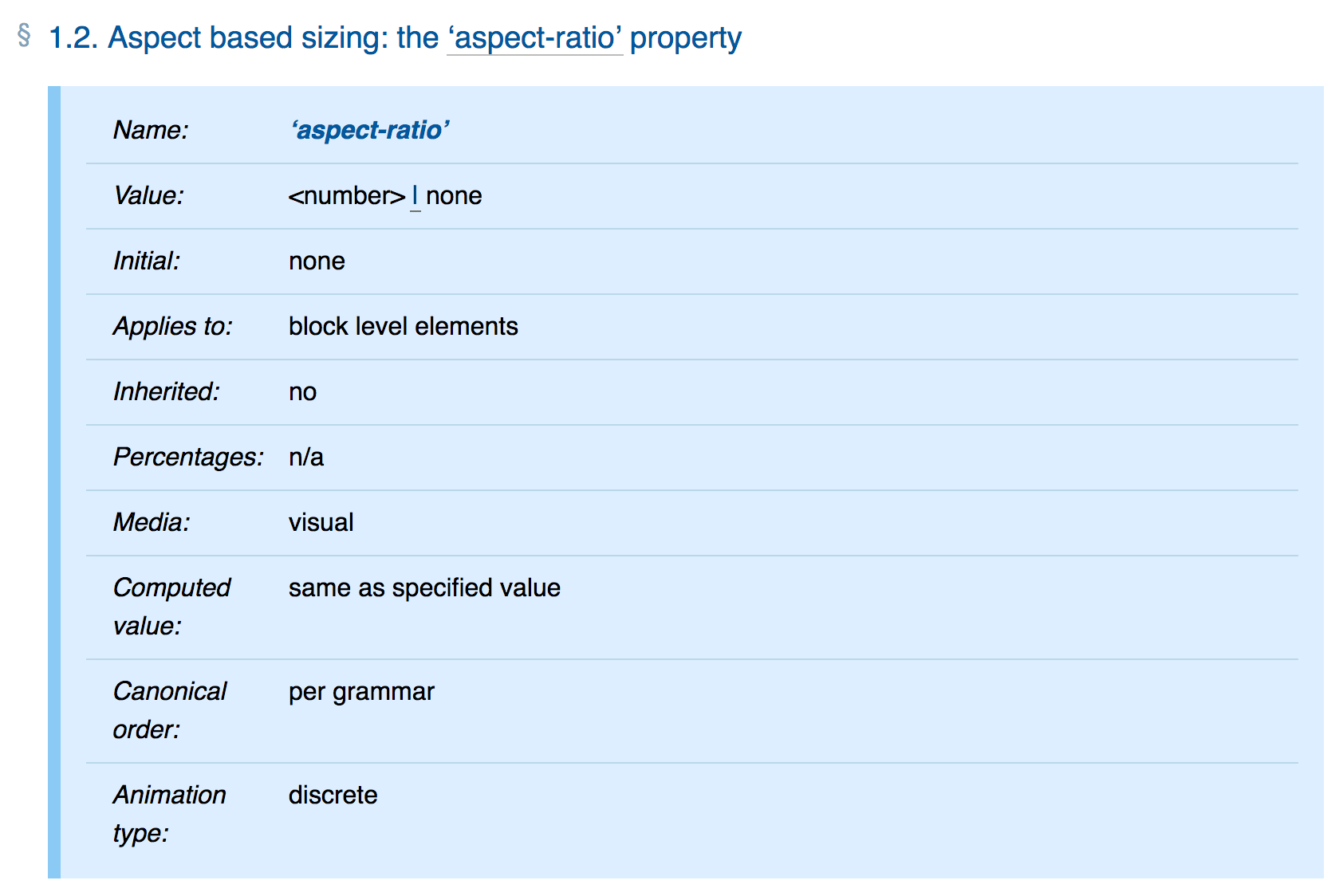 The proposed syntax is currently leaning towards this (aspect-ratio needing to be a number):

So, can we use this “Logical Sizing” thing then? And when?

Given the fact that Tab is present here at CSSDay I’ll be asking him about it later (I’m actually sitting next to him right now, yet he’s currently busy finishing up his slidedeck on Houdini – which he’s about to present later today – so I won’t be bothering him right now 😉).

Speaking of Houdini: I’m not sure this can be fixed with Houdini but perhaps it could … another thing I’ll be asking Tab about.