I was meaning to write a blogpost on Gowalla 4. About how I used it less than before. But also about that when I use it (which I still do from time to time), I use it in a more engaged way.

In the blogpost on Path 2, I was going to state that “Path 2 is what Gowalla 4 and the new Facebook app should have been”, yet left that out because I wanted to save that for the Gowalla 4 post.

Now that Gowalla has apparently has been bought by Facebook, and after Inferis coined a likewise phrase on Twitter, I think it’s time to dig up that statement again and go a tad more in depth.

A much disputed move that Gowalla made in their fourth version was the removal of the items, even though a few months before that changes to the items were made to actually promote them.

One of my Gowalla items I was most proud of: received in Madeira at the top of the island after a five hour hike.

To me, the item hunting was the feature that made Gowalla unique (you’d get no standard points or badges, but nice items) and — above all — fun: Gowalla was a game.

Next to letting people know where you were, the items in Gowalla were the real incentive to checking in:

As some have written before, the possibilities with items were endless, and could’ve have helped further shaping Gowalla.

Now, Gowalla 4 wasn’t all bad. One core feature defining Gowalla 4, next to the city guides for example, was the introduction of stories. With the stories one, instead of saying “I am here”, is now saying “I am here with my friends X, Y and Z” making it all more social (one could even tag friends from other platforms, such as Facebook).

A typical Gowalla Story: Me and some friends out eating.

Each story one made can be compared to a journal entry, and that’s how I ended up using Gowalla 4: only if there was a worthy event I’d check in, add my (Facebook) friends, post some photos and add some comments. After an event was done, the story would serve as a memory one can share, whereas a check-in before would only serve as an entry in a check-in log.

Some memories/stories I now look back at are the surprise party we had when my brother turned 30, a beerfilled party I attended, taking my son to a meet and greet with a childrens’ character, etc.

Technically related: A technical point worth noting regarding the Gowalla 4 release was the API breakage. Some stuff just stopped working, without prior notice. And it wasn’t the first time this happened. My advice to anyone upgrading their API: please notify your developers before making the changes (*), or — even better — version your API to prevent stuff from breaking at all. Will spare you some sad/furious developers.

(*) When the new check-in API was released, Gowalla did notify developers. With version 4 that unfortunately was not the case.

Facebook is currently rolling out a new feature called timeline. People who have a developer account most likely have already enabled it.

The Timeline not only represents your profile/wall in a timeline, it also allows you to back-log some important events you’ve encountered in your life.

Just as Gowalla has shifted towards storytelling with their Stories, Facebook will be also be shifting towards this, and a rather big story too: the story of your life. When were you born? When did you get your driver’s license? When did you buy a house? It soon will all be on Facebook (if you choose to do so). 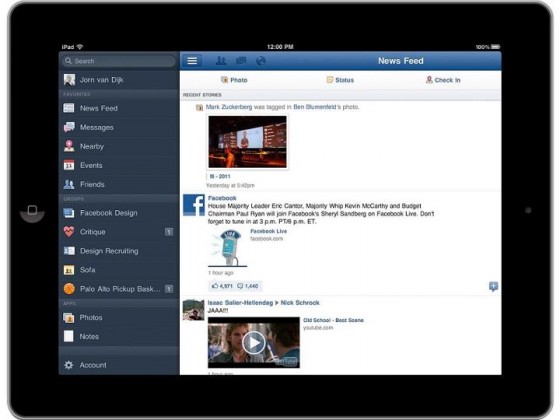 It should also be noted that Facebook has recently released an update to its mobile app. Although it’s technically a very interesting app, the Timeline feature is nowhere to be found in it.

In September, the second incarnation of Instagram landed upon us. In a year time this app went from zero to hero. Mainly the fact that it is really easy to post photos quickly, even with some nice filters applied made this app fun to use and thus an instant success (Maslow at work fellas: Functional > Reliable > Usable > Pleasurable).

In version 2 no crazy new features were introduced to: next to sporting a higher resolution and some new filters that was about it. And even although some filters in Instagram 2 where kinda FUBAR, Instagram took the hit standing as people already were in love with the app.

As mentioned before, Path 2 has hit the jackpot with its new version and has become quite the storyteller: from telling where you are (cfr. Gowalla, Foursquare), what you are doing (cfr. Twitter), who you are with (cfr. several others), to what you are listening to (cfr. Last.fm, GetGlue), posting photos with filters (cfr. Instagram), and posting videos. A pity Path doesn’t support movies/tv series though (cfr. GetGlue), or it’d be a true digital polyglot.

Piecing the pieces of the puzzle together

Having used Path 2 the past few days it’s become clear that this app is about as close as it can get to being a Swiss Army Knife and might ultimately replace several apps you’re already using. For example when Instagram came around it replaced Camera+TiltShiftGen+CameraBag+Flickr/Twitter/Gowalla (part of ˜) in one go for posting a filtered photo at a given location.

Comparing Path 2 with the other mentioned apps (Gowalla, Facebook, Instagram) it’s also become clear that the other apps have some catching up to do, in order to remain fresh.

I’m pretty sure it’s become clear by now that apps/services will always have to push forward (*) in order to remain fresh, around each corner a contender can pop up and hit one hard. An aspect I see returning in most of the apps is storytelling. Without storytelling, I’m quite sure, no app will survive in the long run.

Is Path then such a treat to others? No. But it has potential; The ideas are there. It plays the storytelling card, which is directly linked to emotion, rather well. With some tweaking, I’m pretty sure it can outwin some apps. I hope the other apps find energy in this and re-invent themselves; again, if necessary.

(*) Beware, change isn’t always good though: Don’t kill features people really love, even if it’s only a small portion of your user base who might just be your platform advocates (cfr. Gowalla); and don’t make big changes too swift (cfr. Facebook’s layout changes).