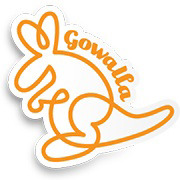 A vast amount of time was spent on minimizing the load on both my server and the Gowalla (API) server:

The design — if you can call that a design — is pretty straight forward and is built around the main map which one can see. Below are some extra screenshots of some special scenarios that might appear (no location, no items, no interesting spots or no spots at all)

The used icons in the sidebar were all found via iconfinder.net