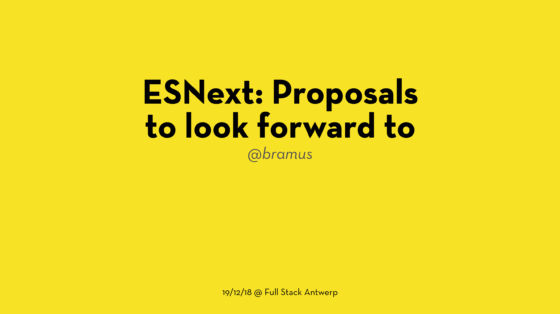 Yesterday I was invited as a speaker at the Full Stack Antwerp December 2018 Meetup at icapps.

At the meetup I gave an adaptation of my talk “What’s Next for JavaScript”. The talk itself – which got renamed to “ESNext: Proposals to look forward to” – goes more into depth onto the proposals themselves, and skips the coverage of ES2015 through ES2018 (which could be a talk all by itself).

With the yearly ECMAScript releases (ES2015..ES2018) of a lot of things have changed in JavaScript-land. And even more changes are ahead!

This talk takes a look at a few of the upcoming ECMAScript features, which will (hopefully) become part of the ECMAScript Language Specification in the near future.

The slides are up on slidr.io, and also embedded below:

Thanks to the organisers for having me, and thanks to the attendees for coming to see me. I hope you all had fun attending this talk. I know I had making it (and whilst bringing it forward) 🙂

📅 If you missed out on the talk and want to see it, you can always attend Full Stack Ghent March 2019 Meetup. At said meetup I’ll bring forward the same talk.