Earlier today I ran some tests to see how text-wrapping/hyphenation of long uninterrupted strings works in browsers. I tested both “normal” strings and strings of emojis.

The tests (and its rendering results per browser) are stored on Codepen and embedded below: 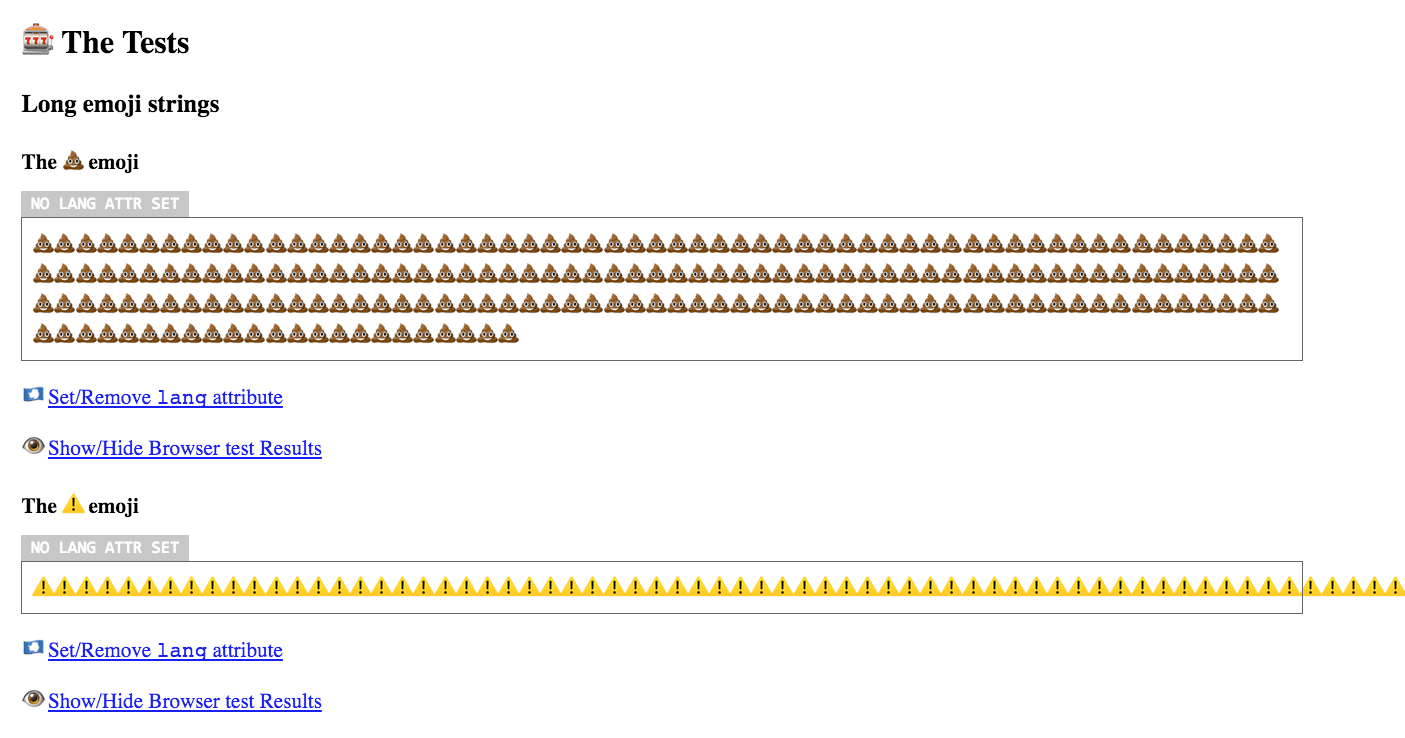 These tests left me with some core questions:

Later in the afternoon Khaled Hosny jumped in on Twitter, and pointed me towards the needed Line Breaking Properties Specification, by which I was able to answer the core questions. Here goes …

1. Why do some emojis get text-wrapped, and some not?

This is dependent on the “Line Breaking Property” which is set for/on a character.

These classes are then combined into properties. To us relevant properties (extracted from the spec) are:

Characters with this property do not require other characters to provide break opportunities; lines can ordinarily break before and after and between pairs of ideographic characters.

Characters with this property require other characters to provide break opportunities; otherwise, no line breaks are allowed between pairs of them.

It’s these properties that can then be assigned to a specific character.

Say a character has the AL Line Breaking Property set, then it means that no line breaks are allowed between pairs of them.

Characters (and thus emojis) have a “Line Breaking Property”, which applies one or more breaking classes onto the character. Two of the possible values for said property are:

2. If the above is a feature: is there a list of emojis – or can we detect which emojis – that get text-wrapped (and those who are not) available somewhere?

The answer to question 1 clearly indicates that it’s an actual feature. Khaled also sent me a link to a plain text file mentioning the Line Breaking Properties per character. Linking back to the tests I ran, we can extract these values for 💩 and ⚠️:

💩 and ⚠️ have a different Line Breaking Property set:

2b. (Bonus question) Can I somehow force emojis with the AL-property to split in between pairs?

Yes you can! From the spec:

Use ZWSP as a manual override to provide break opportunities around alphabetic or symbol characters.

When looking that one up in the list, we can see that is has ZW set as a value for its Line Breaking Property. The spec mentions that ZW applies the (A) class, thus allowing breaks after it 😊

Manually sprinkle a ZWSP character in between pairs of AL-emoijs to provide break opportunities.

Using CSS you can use word-break: break-all; to allow breaks be inserted between any two characters.

3. Why do emojis get text-wrapped, and not hyphenated?

Browsers use a language-based hyphenation dictionary to apply hyphenation. The dictionary to use is defined by the set language on a document or element. From the CSS Text Module Level 3 Spec:

(*) As seen in the tests it should be noted that firefox follows this guideline quite strictly, as hyphenation only works when explicitly setting the lang attribute to a one of its supported languages (see tests). Chrome and Safari, apparently, are not so strict in this and use a default language. There’s a bug filed for Chrome on this.

There is no hyphenation dictionary for emojis.

Emojis don’t hyphenate because they have no hyphenation-dictionary. For regular text, be sure to set your lang attribute if you want hyphenation to work properly. Also: IE/Edge don’t like my tests, apparently.

Now, that was an interesting journey I must say. I now understand why certain things (should) happen. 🙂