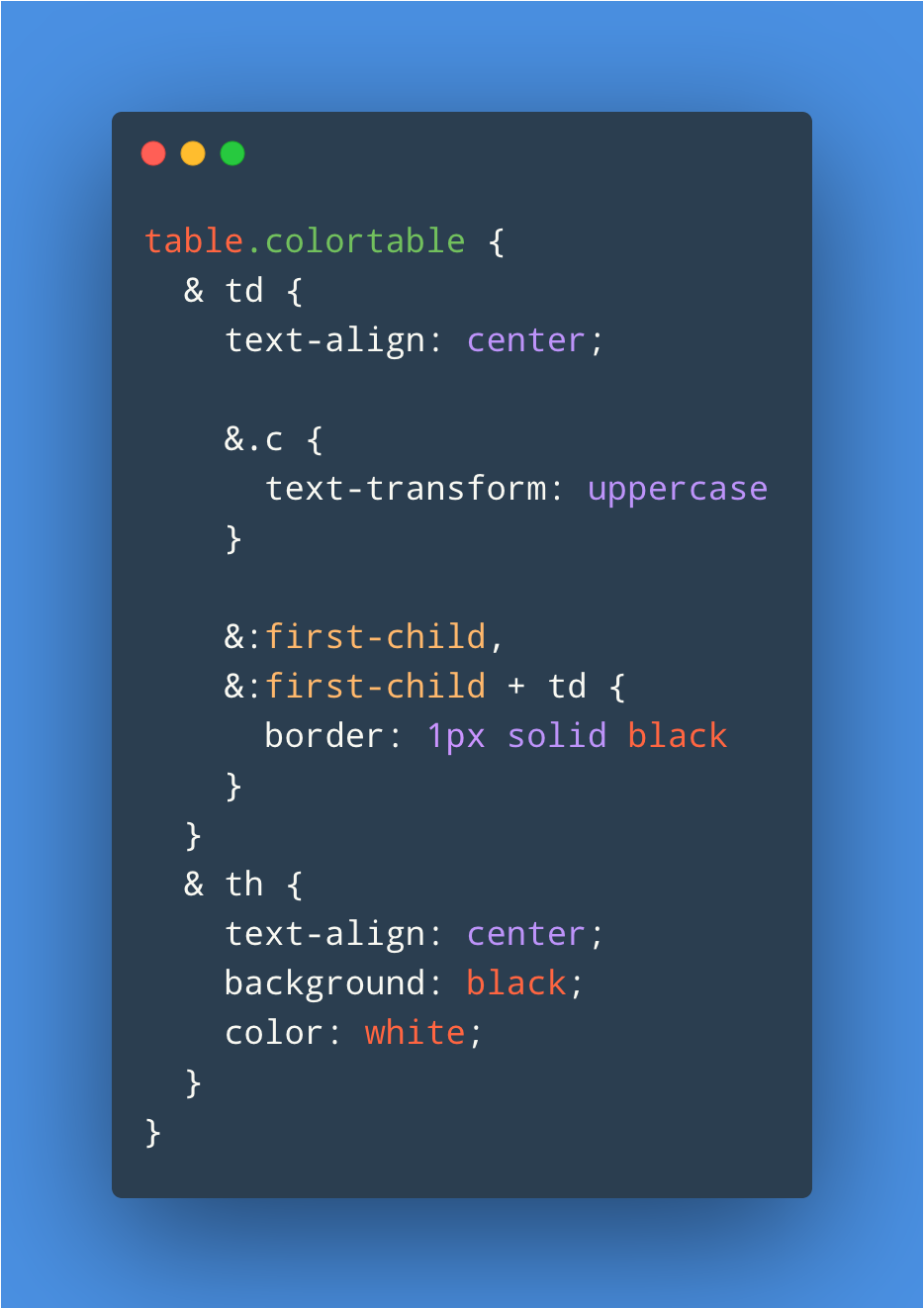 Early March the first Editor’s Draft for the CSS Nesting Module was published. The draft outlines a future mechanism by which we’ll be able to nest CSS selectors natively (e.g. in pure CSS, without the use of any preprocessors)

This module describes support for nesting a style rule within another style rule, allowing the inner rule’s selector to reference the elements matched by the outer rule. This feature allows related styles to be aggregated into a single structure within the CSS document, improving readability and maintainability.

UPDATE 2021.07.07: 🥳 The CSSWG has agreed to publish the First Public Working Draft of this module, making it part of the Recommendation Track! Things are getting official, folks!

UPDATE 2022.07.26: There is a poll about the syntax running over at developer.chrome.com. Please vote if you want to be heard on this.

# Direct nesting with the & selector

Using the & selector (read this as “the nesting selector”), you can refer to the selector from the parent rule.

Instead of writing this …

… you can write this thanks to CSS Nesting:

# The & selector is mandatory when nesting

When nesting in CSS, you always need to use the & selector. So you won’t be able to do this:

The fix would be to write & .bar instead of .bar

# Declarations must become before nesting selectors

If the outer selector also contains some CSS properties, they must go before the nesting selector-part. In the example below the rules after the inner selector will simply be ignored:

The fix would be to place the font-weight: 700; declaration before the & .bar block.

# The & selector must be the first compound selector when direct nesting

The & selector can also only be used when it’s first compound selector (e.g. it appears at the first position) of an inner selector.

💡 This requirement is put in place so that the parse can unambiguously determine what we’re talking about. As explained in the spec:

The syntax of a selector overlaps with the syntax of a declaration. For example, if a parser starts by seeing color:hover, it can’t tell whether that’s the color property (being set to an invalid value…) or a selector for a <color> element.

Note that the nesting selector will take over the specificity from its enclosing selector list.

The specificity of the nesting selector is equal to the largest specificity among the complex selectors in the parent style rule’s selector list.

When you have this piece of code …

This behavior is similar to how the specificity of :is() is calculated.

# An alternative syntax: the @nest rule

To cater for that third caveat, you can to use the @nest rule syntax, which is more lax. It still requires a & selector, but the selector does not need to appear first:

Aside from the slight difference in how they’re written, both the @nest rule and “direct nesting” are exactly equivalent in functionality.

Don’t expect this to land in browsers any time soon, as the spec is still in its early stages.

💡 Shown above is a dynamic CanIUse.com image, showing an always up-to-date support table. By the time you are reading this browser support might have become better.