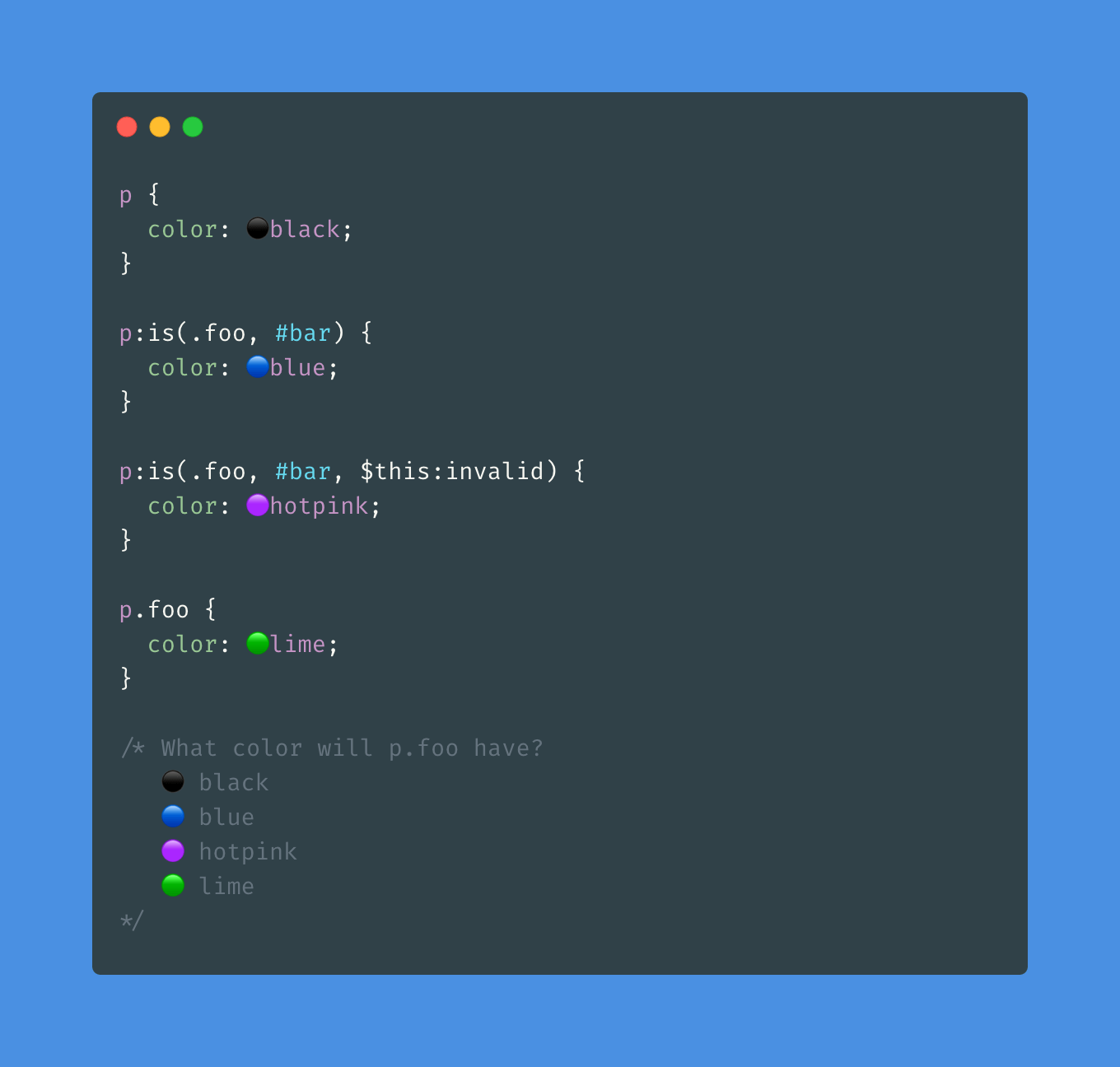 Back in 2019 I shared how the CSS :is() selector will simplify things when writing CSS. What I didn’t know back then, and only have learnt quite recently, are these three important facts about CSS :is():

Let’s take look at what that means.

What if you include a selector that’s pure gibberish inside :is()? Will the rule-set be declared invalid or what?

Thankfully :is() is very forgiving here: the $css:rocks part — which in itself is an invalid CSS selector — will simply be ignored, while keeping the rest of the selector list in place.. So using the snippet above, both p.foo and p#bar will be colored hotpink. Yay!

Should you try this without :is(), the whole rule-set would become invalid. In the snippet below, none of the paragraphs will be hotpink due to that faulty $css:rocks selector invalidating the whole selector list.

Note that the paragraphs will have font-family: sans-serif applied, as it’s only the invalid rule-set that ends up being ignored.

🔮 In the near future this latter behavior will no longer be the case as the CSSWG intends to modify these rules such that an invalid selector will simply be ignored rather than invalidating the whole selector list. Relevant CSS WG Issue: 3264

# 2. The specificity of :is() is that of its most specific argument

Take the code below. What color will p.foo have?

☝️ The :not() and :has() pseudo-classes also have their specificity calculated this way.

☝️ If you don’t want to be affected by this, you can use :where() instead of :is(). It works in the same way :is() does, but will always have a specificity of 0. You can cleverly wrap this around other selectors to undo their specificity. Think of :where(:not(…)) for example.

😬 Although I wouldn’t recommend it, you could perfectly do something like :is(#bump#up#the#spe#ci#fi#city#yo, .foo) to override selectors more specific than .foo …

# 3. :is() does not work with pseudo-element selectors (for now)

If you read up on the definition of :is() you’ll read that it accepts a “Selector List” which is a comma-separated list of simple, compound, or complex selectors.

When looking up simple selectors, there’s an interesting thing to note:

🔮 In the future this will become possible though, but not just yet. Relevant CSSWG Issue: 2284

Knowing these three facts about :is() will surely help you understand it better and make using it more fun!

See the Pen The CSS :is() pseudo-class. What color will .foo have? by Bramus (@bramus) on CodePen.

If you understood well, the Pen above should hold no secrets to you anymore 🙂