Recently, Stephanie Eckles sent out a call to revive the use of CSS border-image. Not to use it with images — which requires a pretty nasty syntax — but to create Gradient Borders in CSS.

When `border-image` was announced, I was off-put b/c the syntax was so wild.

But with modern browsers, it's the *easiest* way to create gradient borders.

Curious to see what we can do with them, I whipped up a few demos using CodePen.

The most simple usage is to set some type of CSS gradient as the border-image:

Then I wondered if I could animate the border, so that it would rotate along the edge.

To animate the border gradient you’ll need to add an angle in there — using a Custom Property — which you animate using some @keyframes.

By using a Custom Property we can have the browser properly automatically interpolate this value from 0deg to 360deg instead of needing to add individual keyframes for every 1 degree increase. For this to work we have to register the Custom Property using the amazing @property at-rule

⚠️ As @property is only supported in Chromium at the time of writing, the demos from here on down will only work in browsers based upon it (e.g. Google Chrome, Microsoft Edge, …).

For browsers that don’t support it you could add individual keyframes for each step, as shown in this demo. However, for demonstration purposes I’m not including the extra code in any of the demos below.

While the effect here looks quite nice it won’t play nice with more than two colors. Take this rainbow animated gradient border for example:

🕵️‍♂️ You can see best what’s going on by toggling the fill option there … ugh, that’s not what we want!

To fix that I first thought of using a radial gradient but what I need is a conic gradient: 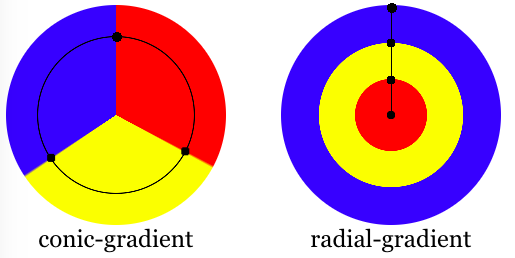 This way each color of the gradient will extend nicely into the border, resulting in a correct animation.

💁‍♂️ To make the end of the gradient blend nicely into its begin color, we have to repeat the said color — e.g. red — as the last entry.

When toggling the fill you can see that border-image here stretches out the color perpendicular to its edge, instead of letting the gradient “pass”. This might not be 100% what you want, but for me it was exactly what I aimed for 🙂

🎩 For non-Houdini browsers you can check out this fork, which uses individual keyframes to animate the gradient.