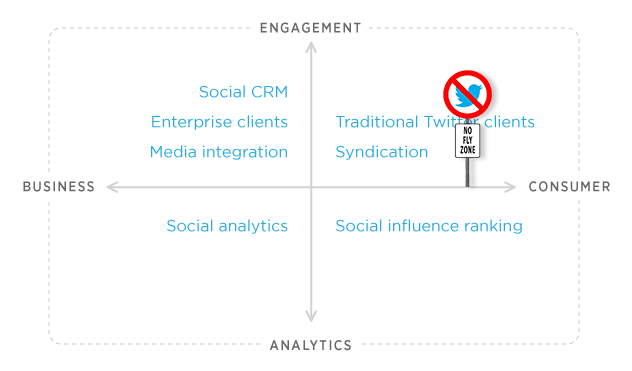 The changes Twitter is planning on pushing forward throughout its API and API usage are turning spiralling into one big fiasco as developers basically are given the finger.

Nearly eighteen months ago, we gave developers guidance that they should not build client apps that mimic or reproduce the mainstream Twitter consumer client experience.

As Gruber put it:

So Klout, which is utter vainglorious masturbatory nonsense, that’s OK. But services like Storify and Favstar, which are actually useful and/or fun, those are no good. And don’t even get me started on Twitter turning against client apps. For chrissake Twitter’s own app started life as a third-party client.

Here’s an idea for all app developers that are in Twitter’s no-fly zone: Just add some randomly assigned score next to each username and *BOOM*, you’re now in the lower right quadrant because you’re doing Analytics™, Klout-style!