Joe Hewitt, on the future of the Apple TV:

I’ve been reading a lot of speculation recently about what a future Apple TV might look like. Not nearly enough of these analyses have talked about AirPlay. It’s clear to me that AirPlay would be so important to the Apple TV, you might as well call it AirPlay TV.

The mentioned AirPlay functionality can be seen in this video (skip to 1:42 to see the real potential of this):

That’s right, AirPlay lets you (wirelessly!) connect your iPad with your Apple TV and stream video/graphics from the former to the latter. Joe speculates that the next Apple TV will be set up like this: omit all the set-top boxes you have and stream from your iPad — which becomes a device to navigate through the offered content — to your Apple TV.

As demonstrated in the video above, this also allows you to use the iPad as a controller when playing a game on the iPad.

The first time I’ve seen such a likewise setup, albeit between an iPhone and an iPad, was in the game The Incident. If you have the game running on both devices, you can use the iPhone as a controller for the iPad.

Additionally, if you’d then hook your iPad via a cable to your TV (possible because The Incident supports TV out): BOOM, instant game console 🙂

As you might know, I’m a fan of Plex, the Media Center Solution of my choice. When I applauded the technological setup of Plex/Nine, I mentioned Plex for iOS which lets you stream data from your Plex Media Server (PMS, no pun intended) powered Mac (or Windows Computer) to your iPhone/iPad.

Plex for iOS also gives you the option to play the selected video on the device running the PMS … which brings us back to the AirPlay situation: use your iOS device as a remote to control what you see on your TV. 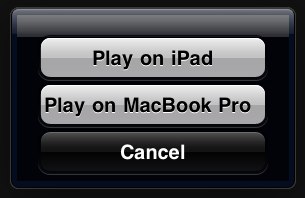 Above that LG Smart TVs also play nice with Plex: if you have such a TV — which I do happen to own — you can stream data from your PMS powered device to your LG Smart TV. And yes, it just works (TM). Full HD. No hassles. No Stuttering. But you do have to own an LG Smart TV, or an LG Smart TV Upgrader … which in essence is something like the described AirPlay TV as it’s a small box that you hook to your TV which can then talk your Plex Media Server.

Connecting the dots: Yes, I think Joe is spot on with his analysis, as we’re already using the techniques described (your TV itself as a consumer, handheld device as a controller) today: use device A to play something from device B onto device C.

Above that I’m now even more curious to where that cryptic Plex blog post of yesterday is pointing to … could it be that Plex will play nice with this future Apple TV device? Or might we expect Plex 10 (on November 10, which would make sense)? Or will it be a new Plex for iOS version that allows you to command your LG Smart TV such as the AirPlay feature allows one to do? And oh, then there’s this icon posted on Dribble for a new Plex feature: 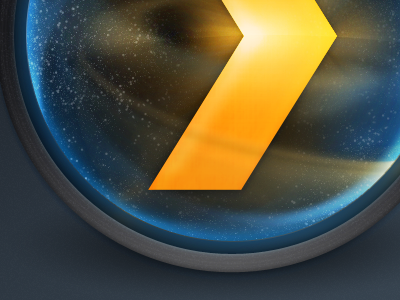 Yeah, the inner geek in me is running overdrive right now.