With all the fuss about Firebug since its 1.0 beta release some might forget that there are other extensions to pimp your Firefox to be a web all-star … (and above that people seem to be forgetting that this extension has been around for quite a while now)

I’m writing them down in the order I discovered them, just to have a retrospect and put everything in place …

Chris Pederick’s Web Developer Extension is the first one in its kind: an extension created for web developers to make their life easier.

Ever since I discovered it (back during my internship at tnt, March – June 2005) I got hooked by it since it provides you plenty of options from disabling cookies via zapping style sheets over validating the HTML and auto completion of forms amongst many other features this extension has. Before this extension came along, many of its features had to be accomplished by using bookmarklets

To efficiently use this extension one does has to learn the keyboard mapping to the specific features. Favorites here are:

Use it, you won’t regret it!

HTML Validator (based on Tidy)

HTML Validator (from Belgium!) is a nifty extension and a real time saver: it validates the current page inline and shows the result in your status bar 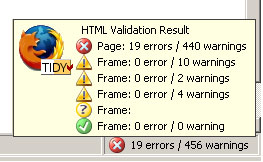 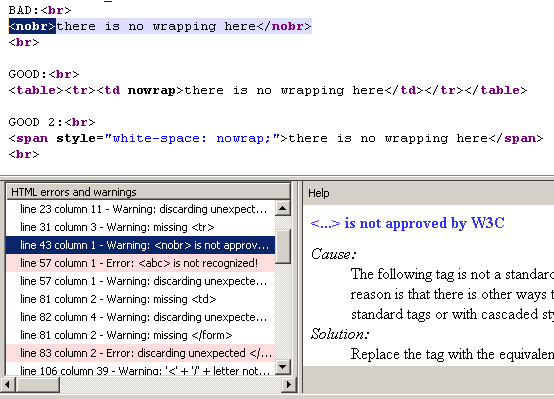 The validation itself is not perfect though. JavaScript code nested between <![CDATA[ and ]]> still will be marked as failed. Therefore a small validation by the W3 validator afterwards will be needed (see previous extension: SHIFT+CTRL+H/A)

For filtering of the headers, one has to open up the pop up version by navigating through the Firefox menu: Tools > Live HTTP Headers

This extension does not let you watch the content of the page passed though, therefore you have to rely on external tools like Network Chemistry’s Packetyzer (which is a nicer version of Ethereal)

An other one of my favorite Firefox extensions is ColorZilla indeed. ColorZilla adds a small color picker icon to the left hand side of the status bar. By clicking it, your cursor will become a color picker, to pick any color from within the Firefox window (even from images!).

After having picked a color, one can right click on the color picker icon and then copy the selected color into the most common formats uses: hex with the #, hex without the # (Photoshop is so stupid to not autofilter out the #), rgb() in numbers, rgb() in percentages.

In a world where users still use IE, the IE View extension comes in real handy. I am aware that lots of likewise extensions exist, though I think that this was the first one in its kind. 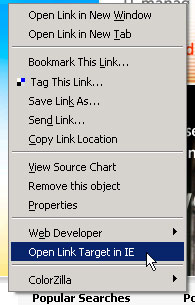 What more is there to write about Firebug? Since the previous version it went “from great to awesome” (damn, forgot who stated that). Above that it has taken over lots of features from some of the other extensions mentioned here (live CSS editing, live HTML editing, AJAX debugging by which you can see the requests flashing by … and even see the responses, etc.). To find your way into Firebug, just give these links a visit:

And remember: just hit F12 to open the Firebug window (or CTRL+F12 to get the external window version ;))

Another handy development extension (and timesaver) is JS View which nests itself next to the quick search bar (although at work it sits in the status bar – maybe the versions differ, didn’t check) and when clicking it, it gives you a list of the currently linked stylesheets and javascript files. When then clicking any of the items you immediately are taken to the view source window with the selected file in the source. Very handy, very timesaving imo! 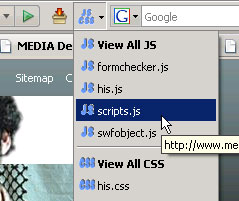 At work I develop all of my (PHP) projects in the Zend Studio. With the Zend Studio comes an extension for Internet Explorer giving you the option to debug a page, or the next POST (if the debugging server is installed on the webserver that is). Now, they’ve also released the Firefox version of this little handy thing.

I’ve been experimenting a bit with microformats and just found the tails export extension so useful I could not exclude it from this list. Directly from the readme:

An extension for Showing and Exporting Microformats. Currently it supports the following formats:

The statusbar contains a microformat logo that lights up when it detects known microformats. It is grey when it could detect none.

Too bad it stopped working in Firefox 2.x…

Phew, that’s it I think … I could have mentionned some extensions like “view source chart”, yet I don’t think that one really helps (after I had installed it I used it for a day and that was about it) or other nice ones like tab preview, forecastfox, etc. who indeed are handy yet don’t pimp your firefox to a web all-star…