Well yeah, nearly September so the new Television Season is about to start. One of my favorite shows is Scrubs (from which the subject of this newsitem is extracted

) but there appears to be some vague information floating around this show … actually nowhere I can find information on when the new season will start. The Official Scrubs site states "Thursdays 8/9c Starting August 18", but those are reruns that will be aired. Scrubs-TV.Com doesn’t have information either but http://scrubs.mopnt.com/ states that Scrubs Season 5 definately is a go (scroll down to their post "May 18, 2005 Season Five…When?" — why can’t I get a permalink?) 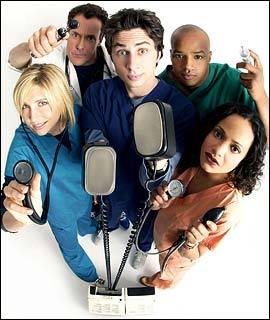 So anywho, I’m looking forward to see J.D. talk to himself (one of the strenghts of the series imo), see Kelso refer to Turk as Turkleton, see the Janitor pick on J.D.

But there’s more than Scrubs in the world … I’m also looking forward to CSI, CSI : New York and Numb3rs in special (and all of them will start end-september). 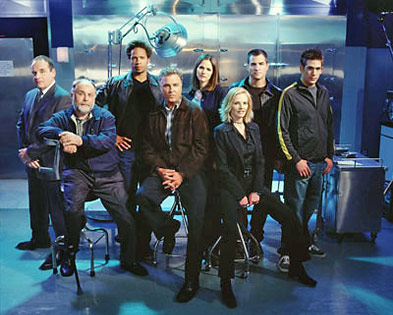 Above that I also (loosely) watch Cold Case, The Sopranos (season 6 will have 20 episodes, but will start in 2006!), Tripping The Rift (already airing since end of July), …

Yeah, some tv-filled nights will be encountered in the near future.

Looking forward to it 😛

Update #1
At Zach Braff’s website there’s a newsitem entitled Don’t Scrub Up Until 2006 (dated July 15) where Zach (he plays the main character J.D.) points out that we don’t have to expect the new Scrubs untill 2006 … hmmz, I hope it ends well … *double-tripple-sigh* :S
Update #2
Read this at Zach’s site:

"Zach let Bill (Lawrence – the show’s creator) know that he would like to exit the show after the new season."

* double-quadripple-sighÂ³ *
So I guess that after season 6, Scrubs will be no more 🙁