The past few weeks former classmate and friend Stijn (@wwdj) has been working on Twitpickr, a webapp which lets you easily upload your twitpic pics to your Flickr account. As of yesterday, Twitpickr has gone live to all twitterati 🙂

Next to the fact that Twitpickr does what it promises to do is the fact that it’s dead simple: Just enter your twitter username (no, your password isn’t required), authenticate the app on Flickr and let it automagically upload your pics. 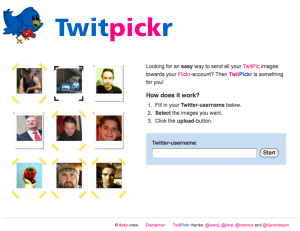 Half a day in and already 400 pics have been uploaded to Flickr, Twitpickr got picked up by @TechCrunch and is spreading throughout Twitter like a fire.

So why not give it a spin yourself? Be sure to give some feedback if you have any remarks (some of the suggested features/remarks already are planned to be developed) 🙂

Note that I’m mentioned on the Twitpickr site, although I didn’t code a single line for it (yet). However I did alpha-beta-gamma-delta-microwave-test the app and by that have given lots and lots of feedback – be it on a #pkz (which is a pancake sunday; a sunday on which you meet up and eat pancakes) or via the support pages – , shaping Twitpickr to what it has – and will – become.