Skip to content
This project is outdated and no longer updated (see various reasons below) and is merely kept here for archiving purposes. No support will be given whatsoever. You should check out my most recent projects on Github

BramusICQ is a script created by Bramus! which lets you control your ICQ client from your phone which are interconnected by floAt’s Mobile Agent (fMA).

BramusICQ relies on a technology underneath named BramusICQWrapper (BiW), also created by Bramus!

BramusICQ was made for use with fMA (with it’s own scripting framework installed next to it) and gives the user the possibility to control his ICQ Pro Client from his cellphone.

BramusICQ, which merely is a script, relies on an underlying technology named BramusICQWrapper (BiW). This wrapper passes on calls made to it to the ICQ API, which then passes on the commands to the ICQ Pro Client (ICQ Versions 98b up to 2003b — ICQ Lite and ICQ5 are NOT supported).

This can easily be visualized by the scheme beneath: 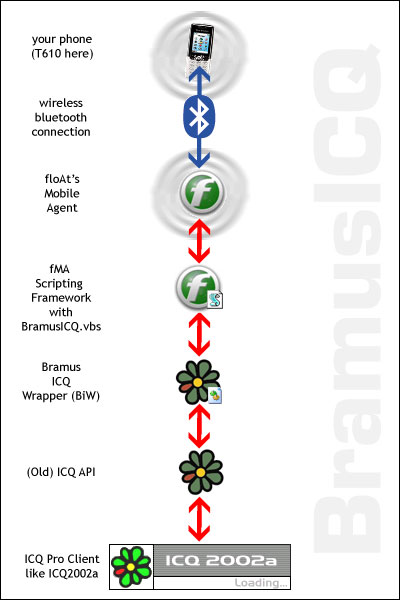 Before ICQ5 came out, ICQ.Com offered a piece of technology named the ICQ API. This API allowed programmers to send commands to the ICQ Clients that this API supported.

The ICQ API was written somewhere in 1999 for use with ICQ 98/99 and hasn’t been updated since! Therefore some functions of the API don’t work (or partially work) with clients older than ICQ99

Since ICQ5 (first dubbed “ICQ Lite”) was a total rewrite of the original ICQ Pro client, the API doesn’t support these newer clients.

The ICQ API used to be available for download at ICQ.Com, but it has been removed. I have mirrored this old version and offer it for download.

Since BramusICQ is a script there exist no screenshots of it. However, some screendumps of how BramusICQ looks on your Mobile Phone can be viewed at the usermanual.

BramusICQ comes with FMA Scripting Framework, as does the ICQ API.
Single download will/might follow somewhere in the future

[ Soon! (too lame to place this content right here at this very moment ]

Make sure the following requirements are met:

If you don’t know where you can find the fMA menu then I suggest you do some reading at the fMA site on how to use fma scripts with your phone.

The main menu consists out of 2 items:

As said before this menu lets you change your ICQ status. This is done by selecting the wanted status from the list.

NOTE: By default, ICQ shows a warning when entering Invisible, NA and Occupied modes. To solve this you must make sure that you have entered all states at least once before using bramusICQ and checked the "Do not show this warning again" option.

In this item you can see your ICQ contactlist. For each contact you can see his nickname and his uin between brackets.

By selecting a user, you’ll see the contact menu,
which has the following items:

To send a message, select Send message from the contact menu.
An inputbox will appear on your phone where you can enter the message.

When the message is entered, select OK and you will see ICQ on your computer sending a message.

An inputbox will appear on your phone where you can enter the URL.
For your convenience, the http:// prefix already is placed 🙂

When the URL is entered, select OK and you will see ICQ on your computer sending an URL.