When checking my stats I see that they’re going wild again. Instead of the normal 300 uniques per day (average that is; used to around 200 about 1 month ago) yesterday checked out at 1,000 uniques (average taken over the week). What caused this? Simple. The iPhone.

With just 2 days (depending on which timezone you live in) until the iPhone is launched, the tension has been rising and people have rediscovered The iSmudginator, the iPhone Scratch Simulator. Somewhere last week, a few blogs picked it up, and the ball started rolling again … referrers from everywhere, as my lovely Mint install and Google Analytics tell me. 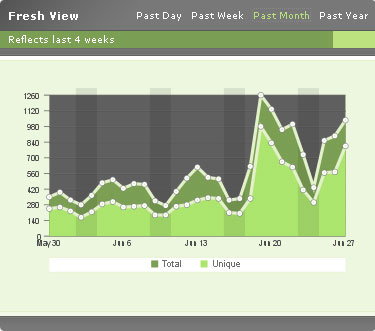 When looking at the “past year” graph, things get even more interesting: 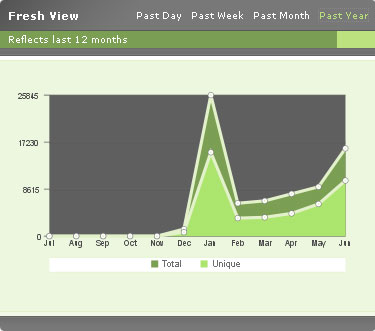 As you can see I’ve installed Mint end December 2006 and I must say that was right on time. Before that bram.us had about 30-50 uniques daily, but then in January 2007 things spiked up to 15,371 uniques / 25,841 hits. Reason? The release of the iSmudignator which got featured on the website of Der Spiegel (big German newspaper) and some mac blogs, combined with the Their Toolbar-post which mocks at Adobe’s CS3 icons which got picked up by some big blogs (I think mezzoblue and some others, not sure though)

Right now, bram.us checks out at 10,508 uniques this month (July), but the month isn’t over yet and – my referrers tell me this – the iSmudginator now made it to a zdnet blog too … Pretty sure January’s record will be broken, as the iPhone frenzy is reaching it’s top.

To make things complete I’m also mentioning that many of the visitors are brought here by Google, mostly searching for TinyMCE-related articles; how to duplicate SQL records; finding things Acceptable in the Eighties; having seen the sunset with no sleep at all; wanting to download music from MySpace; trying to fix that CSS Caret Problem in firefox; wanting to view the source of an e-mail in Outlook 2003; etc.

Update 2007.06.29, 11AM – yesterday checked out at around “13,000 uniques total this month”. Today Mint showed me one big spike: more than 7,000 uniques since midnight as the iSmudginator made it to Gizmodo. January’s record got broken as now already 18,400 uniques made it to bram.us this month 🙂