The latest project I have been working on as a developer for Wax Interactive is IedereenLeeftMee.be (Iedereen Leeft Mee), a national campaign conceived by BeforeTheHype for the national newspaper entitled “Het Nieuwsblad“. From a developers point of view this project has many interesting aspects, of which I’ll hightlight some.

To start off I’ll first explain the concept behind the site, to give one an insight on the how and why later on. It’s very easy actually: Het Nieuwsblad wanted a new marketing/branding campaign as a successor to the previous mosaic campaign. In the mosaic campaign – also developed by Wax – a user could upload a picture of himself and finally be part of a gigantic mosaic of some famous dudes like Tom Boonen, Prince Laurent, etc. For that campaign, Het Nieuwsblad even received the very respectable “Best Of Show”/”Brand Image and Development” INMA 2006 award (scroll down to category 19 on the INMA site). The generated posters for that campaign can be seen here :

Anywho, back to IedereenLeeftMee. The idea behind it all is that everyone is part of a group: a group of friends, a social group, a cultural group, etc. The leader of a group can sign up himself and his team (teams exist of 4, 6, 8 or 10 people) to fill in an existing group picture with their own faces. When chosen a team of 10, the 9 invitees (number 10 is the leader himself) have to upload a picture of themselves, choose an open spot on the group picture and finally see the face on that spot replaced by their own face. When the grouppicture has been completed, the grouppicture from which all faces have been replaced, will be placed into the completed gallery and the group will receive free tickets to a themepark (a themepark which the leader has chosen during signup).

A previous campaign we created at Wax, named hetboekisbeterdandefilm.be (“The Book is better than the movie”) also featured a face replacement. The implementation of it is done like some other site do it: let the user do it through a flash interface (cfr. Crash This Trailer):

As you can see the user has to do many actions as seen in the pictures below. Above that the work is done twice: flash has to know how to place a face into a picture, as does PHP : 2 times programming the same program logic.
Another thing one could say is that the face isn’t merged that well into the picture when looking at it colourwise (colour of the face doesn’t match the color of the remaining skin of the face that got replaced).

For Iedereenleeftmee the process is quite different: 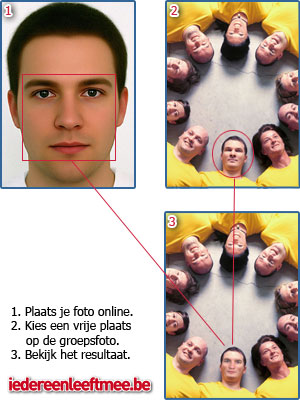 Face Detection and Replacement : how?

I can’t quite get into detail on this one, but here’s what I can tell you. The detection of the faces on an upload picture is done through a component written in C# (a .dll), which is also connected to a WebService and to a Database (yes, the site is hosted on a windows server). A new instance of the component is created in PHP through COM (see the COM reference on PHP.net for more information) and some various functions can be called on that component. That instance itself can pass on calls to the WebService, or can query the database to get information who’m all return some sort of parameter.

The automatic detection of faces might raise some questions: Does it really work? Are the results always that good? What about colour?

Let me say that the detection works very good, but the user is responsible for some stuff:

Please not that I myself did not write the facedetection engine, however I worked real close with the developer of it. Thanks to my questions and insights, some aspects of it all have been improved (some handy functions like isUserAlreadyInGroupPhoto(userId,groupPictureId) were implemented) and the project has gone from being premature to grown-up.

Please note that the names of the functions placed here are not real, although likewise functions do exist 😉

Since many tickets are being given away for free, some security measures had to be created, like these during signup:

And these during the “place my picture into the created grouppicture” phase (from here now on named “addMe”):

These checks are all built in easily, since all of the parameters are stored into the database. The urls are for the addMe process are built dynamically :
/addMe/cardcode/useremail/usercode/

This provides us enough security on the addMe aspect:

Some other measurements where taken, but I won’t digg deeper into them and you all know why 😉

As you can see, the site is entirely Valid XHTML 1.0 Strict which is “standard” for me nowadays. To make the flash code validate, I used the SWFObject (which also bypasses the IE 6 “click to active control”-issue). However, Firefox had some issues with that … all of the sudden some javascript/comment code popped up in FX and due to a lack of time I quickly used some Conditional Comments to trigger the SWFObject in IE and use the normal in FX. Will check it out in the future, although it’s not needed since the site already validates.
Further on, the sites uses JS in many ways: prototype (handy little helper!), form checking, ajax user checking, and even Roger Johansson’s hot-from-the-presses “Opening new windows with Javascript, version 1.1” and a slightly modded Lightbox2 (on the completed gallery page, comparable to a million dollar page).

On the CSS aspect it is – of course CSS 2.1 – not that stunning, but thats not’s needed for project like this, although: hoverbox, CSS Image maps (as seen in CSS Mastery in case you haven’t read it yet), image replacements, etc … are quite impressive, or is it me that thinkgs of these things “common” nowadays?
And this all – again, of course – cross browser compatible 😉

With all this “latest technology” stuff, some browsers had to be “cut off” from the site though … it might not seem “fair”, nor “well thought off”, but here are browsers that are allowed to visit the site:

As you can see that are the A-Grade browsers (as Yahoo! likes to call them). All other browsers (like IE5 MAC … *yuck*) were ditched out. Hey, that’s what you get when using the newest techniques like AJAX, CSS 2.1, …

Other stuff I haven’t even talked about

Time is too short to even talk about these aspects

Summing it all up

Summing it all up this project was quite intense, stressy (keeping the server on a leash), and fun to do! … adapting myself to an existing facedetection engine (+ giving feedback on it to improve it), installation of the webservice and component on the server (yes, I also do serveradministration), coding some massive PHP, pulling off some nifty javascript/css/xhtml tricks, etc. ain’t done everyday.