Since PHP 5.6, the use of $HTTP_RAW_POST_DATA is deprecated. Now, I’m not using this so I’m in the clear, or at least I thought I was …

The default value for always_populate_raw_post_data in PHP 5.6 is doing more harm than good. Perfectly good code will spit out that error whenever it receives a request that uses a payload (viz. non-application/x-www-form-urlencoded encoded data in the request). To fix this issue, explicitly set the value of always_populate_raw_post_data to -1 in your php.ini. That way the error won’t appear.

As mentioned in the link above PHP 5.6 will trigger a warning whenever:

The warning spit out is this:

In the default php.ini which ships with PHP 5.6 this setting has been commented out. This results in the fact that the setting is set to 0, thus which should disable it. This hower is not the case: the warning is still shown whenever your script receives a request which uses a payload, whether you use $HTTP_RAW_POST_DATA or not.

A POST request, using application/json encoded data (not uncommon in the age of Hypermedia APIs), will output the warning even if you don’t use $HTTP_RAW_POST_DATA in the receiving PHP script:

If you’re more a JavaScript type of guy/gal, here’s how to trigger it (using jQuery):

Using MAMP Pro, you can set it per host (if you want): 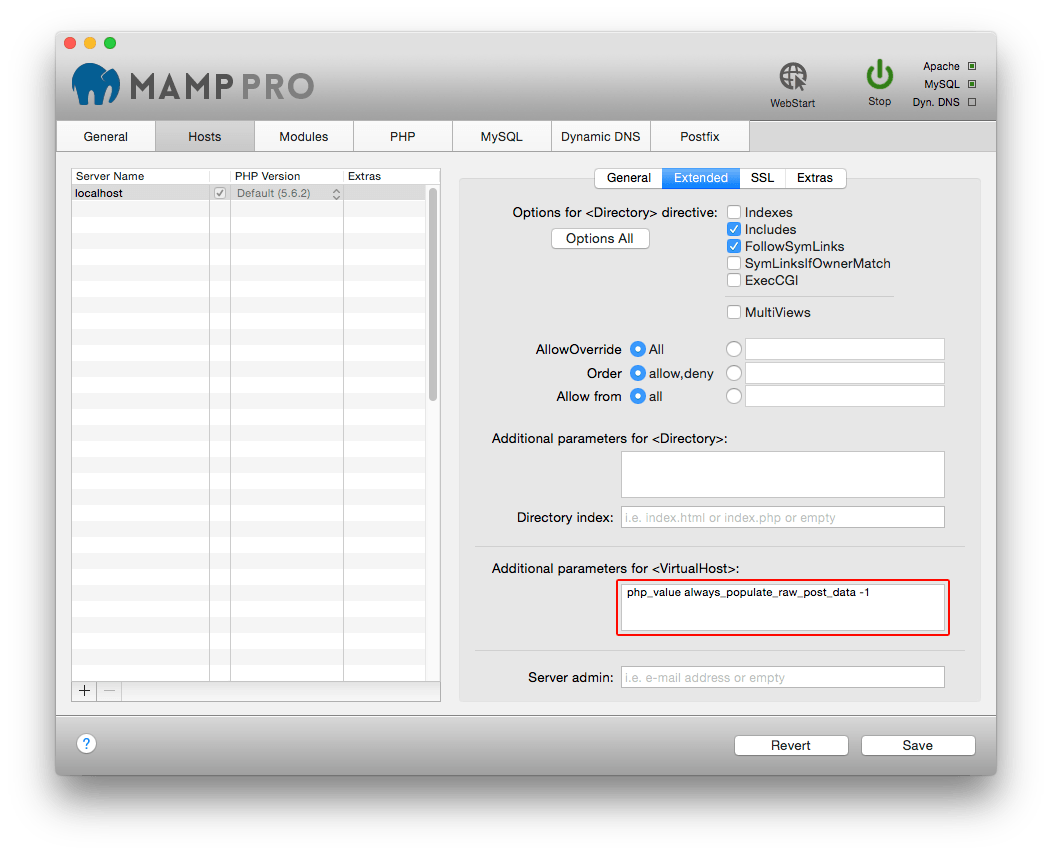 Unfortunately, not everyone has access to their php.ini, or their Apache httpd.conf. When on a shared hosting account you are dependent on the goodwill of the hosting provider. If they’re not that PHP savvy, they might refuse to change the value. This results in the fact that perfectly working libraries — which don’t even use $HTTP_RAW_POST_DATA — will not work properly on default PHP 5.6 installations! To me, this is rather unacceptable: you do everything right, yet PHP still complains for no apparent reason.

The proper fix / An explanation

When looking at the PHP bug report covering this issue it becomes clear that the warning is shown when $HTTP_RAW_POST_DATA is being populated – not when it is being used. Now, this is odd at first sight, as always_populate_raw_post_data is set to 0 (#wat?) yet there’s an explanation for that: “always_populate_raw_post_data=0 does not mean, that $HTTP_RAW_POST_DATA won’t be populated, it only means, that it will be only populated when a supported MIME type is present” (source) … so 0 is falsy, but not for this setting 🙁

Now, I understand that the PHP developers don’t want to break backwards compatibility: shipping with a default -1 would cause issues as scripts relying on $HTTP_RAW_POST_DATA will break. On the other hand, not setting it to -1 by default also breaks stuff: the notice will not allow you to do proper redirects anymore (headers already sent should ring a bell), JSON output becomes invalid, etc.

So no, I don’t agree with the excuse that “it’s technically difficult”. If a setting is causing trouble whether it’s on or off, then a better solution should be found. I see three possible solutions. Here goes, in order of preference:

As options 2 and 3 already have been shot down in the bug report thread, or are virtually impossible; only option 1 remains. So please, core PHP devs, reconsider shipping PHP a default always_populate_raw_post_data -1 in following releases.

Yes, I am aware that you should not display errors on screen in production, yet during development they are. As you don’t have to do an awful lot to trigger the warning, it is confusing for beginning developers. In my job — a lecturer webdev — it’s really strange to have to explain to my students that they’re actually not doing anything wrong but that it’s PHP’s defaults that are the culprit. Their first reaction in such cases always is: “then why is it the default value?”