This year (work year 2006-2007 that is), all the Scouts all over the world are celebrating the 100th anniversary of Scouting. It was on August 1st, 1907 that Baden Powell blew his blew the South African Kudo horn on the Brownsea Island, opening the first Scouts camp ever. Throughout the year the Belgian Scout Organizations (we have 5 here in Belgium) have held some minor events throughout the year, but this weekend the biggest one ever in Belgium (and the 5th (give or take a few) in the world) took place: JAMbe, a weekend with all Belgian Scouts in Brussels (95.000 Scouts and Guides that is!)

The big party all started in September 2006. Each year all the leaders of Scouts en Gidsen Vlaanderen (Scouts and Guides Flanders) – that’s about 3000 people I think – meet up in Kasterlee on an event named Herfstontmoeting (literally: fall meeting) to celebrate the start of the year. This year we teamed up with the FOS Open Scouting and the event was transformed from Herfstontmoeting to Start 100! to indicate the start of our year of celebration. Later on some local events followed (named Zoom!) and in February a Thinking Day was held. And oh, this year’s theme for all Scouts throughout the world is “One World, One Promise” 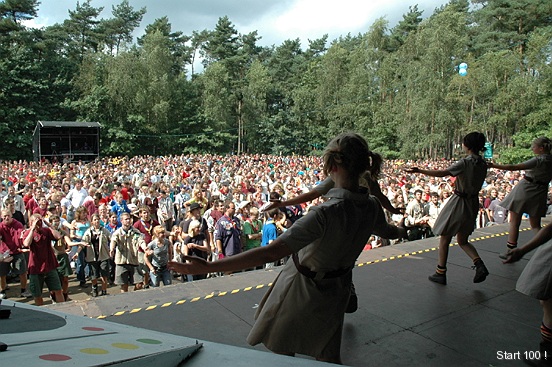 This weekend we had the biggest celebratory event: JAMbe (name derived from Jamboree). All five Scouting organizations in Belgium (Scouts en Gidsen Vlaanderen, FOS Open Scouting, Les Scouts, Les Scouts Pluralistes and Guides Catholiques de Belgique) teamed up to celebrate the big weekend. Goal was to organize an unforgettable day/weekend in Brussels for all members ending with a big show … and I think we/they succeeded! But I’m going to fast now … let’s rewind a bit.

As you might know (presumably not) Scouts en Gidsen Vlaanderen is divided into 12 gouwen which match some regional areas, some as big as a province. Each gouw is divided into several districts. Scouting Deinze is part of District Moerkensheide and District Moerkensheide together with Gent Oost, Gent Noord and Gent Zuid forms Gouw Gent (with our infamous slogan 100% Gent). But why am I telling you this? Simple … just read on! 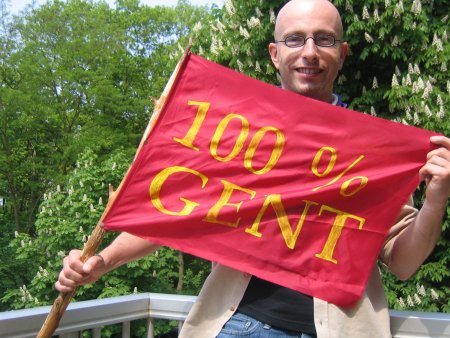 Only Sunday was organized by the main organizations. Saturday was organized by Gouw Gent (for our group that is, other groups were with their own Gouw) under the name “Kampen rond Brussel” and Friday by District Moerkensheide (again for our group). Friday started of with a dropping in our own District for the members aged 12 to 18. On Saturday they all jumped on the train to Brussels and camped together with all the other districts of our Gouw after playing a huge mass game. Then on Sunday they all went to Brussels City Center and were divided in minor groups (comparable to Troops) to do some other games and watch the big show in the Prince Baudouin stadium at the end. The youngest members (aged 6 to 10) came to Brussels on Sunday by train and also watched the big show, but a bit earlier then the older members as the Prince Baudouin stadium can only has a capacity of 50.000. 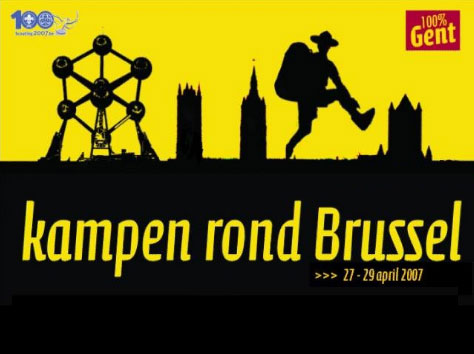 Now, for me the weekend was quite a bit different as I had volunteered to help out with Gouw Gent together with some friends (Scouts friends that is quite obviously). We arrived on Friday on the location where Gouw Gent had set up camp. (As I was told afterwards) Scouts en Gidsen Vlaanderen had searched the 2 years before this year for all kinds of places near Brussels where we could camp, ending up with 15 places from which each Gouw could choose. Gouw Gent chose an an old racing track somewhere near Watermaal-Bosvoorde together with Gouw Oost-Brabant (we were on the west side of the track, they were on the east side of the track). Once arrived, we unpacked our stuff and teamed up with all other volunteers after having had a delicious BBQ. 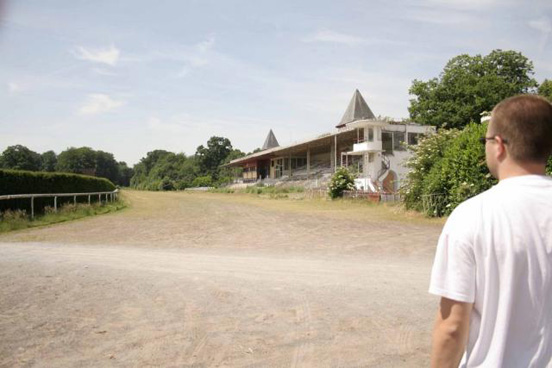 On Saturday we got up early and spent the day setting up tents, placing water tanks (it hasn’t rained in over a month here in Belgium and it has been the hottest April ever FYI), hanging up indicative arrows, … to prepare everything until all the members of Gouw Gent arrived (they then were on a train to Brussels). After having labeled the whole terrain with arrows pointing to everywhere and having had a visit of politician Bert Anciaux (on bike) I had the job of tent steward. Each group that arrived received some tents (to sleep in, duuh!) they had to set up on their own with the help of tent steward. I myself had chosen the task at the – self named – tent distribution center, a hard but really cool job imo. 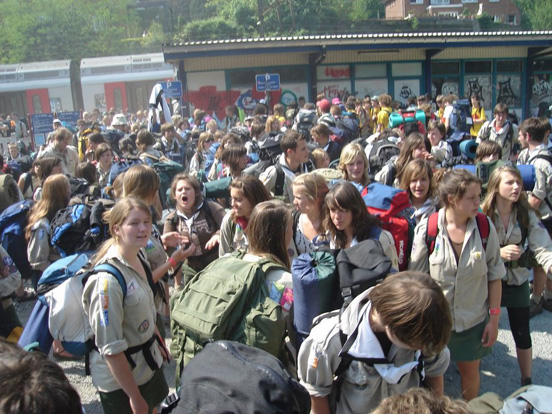 (Part of) Gouw Gent, arriving at the train station 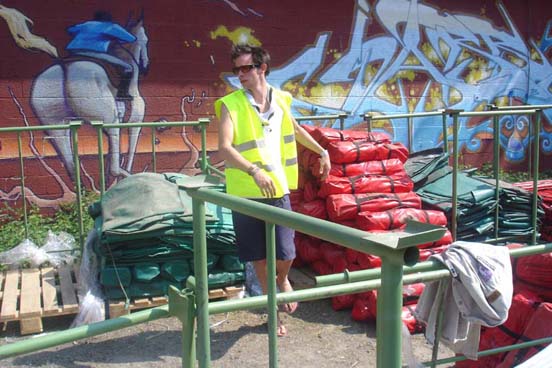 Bramus! the tent steward tossing with bags (15 kilo each) 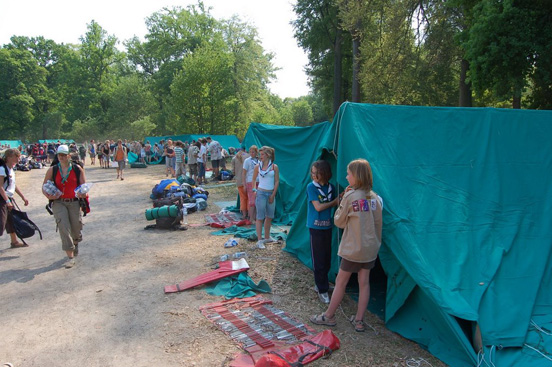 Part of Gouw Gent, setting up their tent

After everyone had set up their tent (with some delay of course) an opening show was held for all members of Gouw Gent. Main guest was De Belleman, city mascot of Ghent as the theme of the weekend (for our Gouw) was De Gouwsche Gentsche Fieste (obvious link to/with De Gentse Feesten) 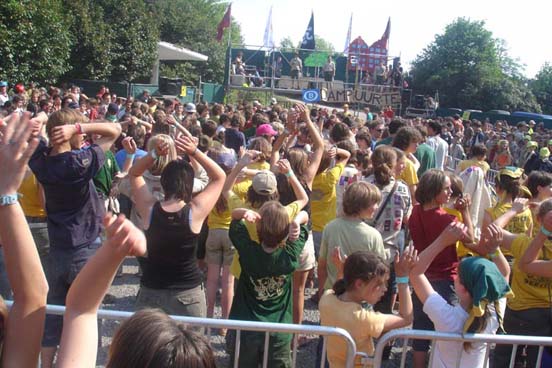 After the show the members continued setting up their tent and then dinner followed. In under one hour we had served dinner to 2000+ people, including having done their dishes and giving them something to drink (had a bar shift myself). Now that’s what I call spectacular! After that a mass game was played, district against district. Moerkensheide lost, but we didn’t really car as we had had tons of fun tossing 150 pillows around, had a rope pull contest (or how do you call that in English?), etc. 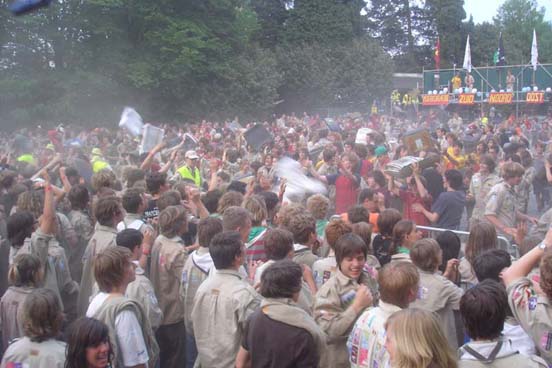 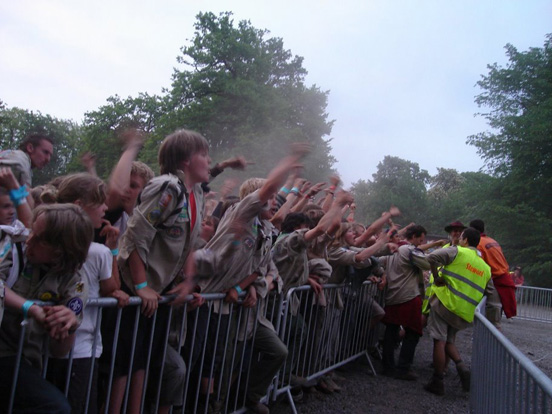 Moerkensheide shouting at Gent Oost (who were looking at the stage then).
At some point the fences were only 1 meter apart from each other making it rather “spectacular” to walk in between 😛

After the mass game (it was 9PM by then I think) each of the age groups had their own party, each closing at their own hours (ranging from 11PM to 1AM) as the day after we had to get up real early as we had also volunteered to help at JAMbe itself (Sunday that is). At 6.30 AM we got up, packed our bags and set off to Brussels City Center. An hour later all the members got up, packed their bags and tent, and tossed their bag onto a lorry which set off to Deinze so they needn’t carry their bag all day long. 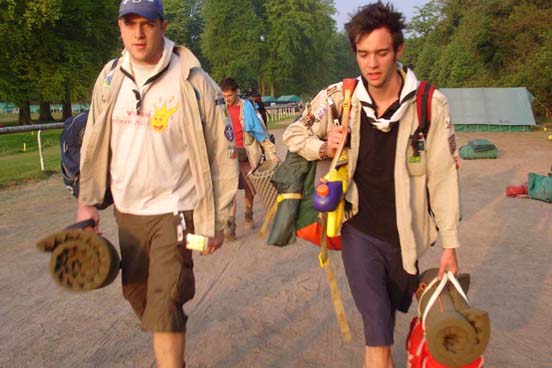 Getting up real early and setting off to JAMbe

Throughout Sunday, all members from Scouting were walking through Brussels from activity to activity. We were guiding the game called Waterland which came out real good with the hot weather. Between 9AM and 2PM the game had evolved from transporting water from A to B with a set of items to tossing it on whoever you ran into. Tons of fun! 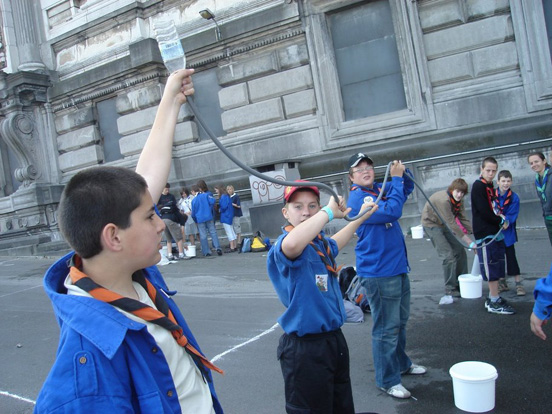 After the activities in Brussels (at around 3PM I think) every member was gathered in one big street to start a main parade to the Prince Baudouin stadium (during that the youngest member where watching the show in the stadium). The parade itself was HUGE – huge as in 20.000+ members all walking a few kilometers throughout Brussels – and quite hectic at the same time (ever lost a few members in a big mass of 20.000+?) and tons of FUN, shouting and screaming. 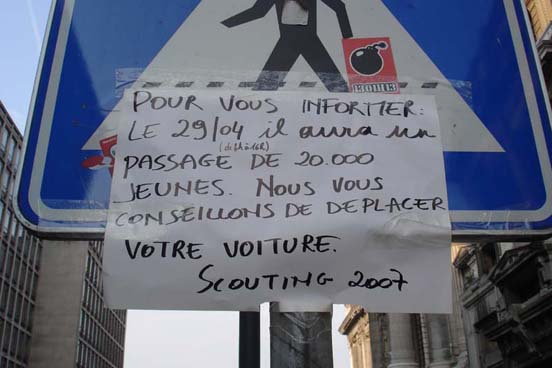 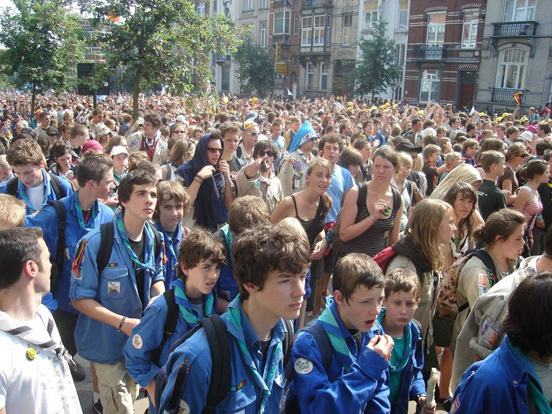 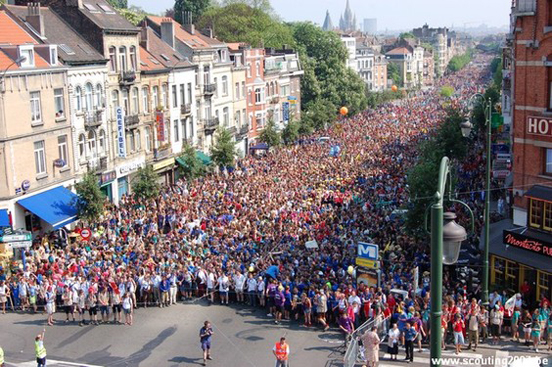 The parade as viewed from above… 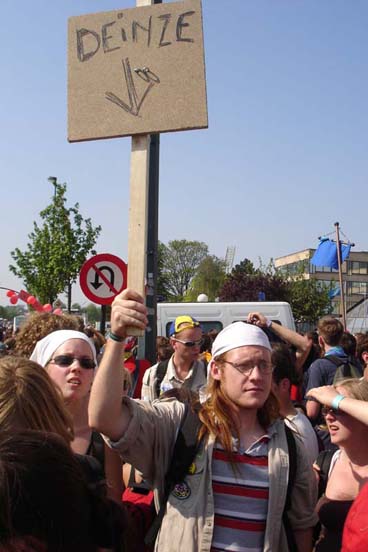 Trying to gather all our members … we succeeded!

After having walked in the parade we finally arrived near the stadium, receiving bags of water as the temperatures were really hot … an hour more of queuing and we finally made it into the stadium to watch the show. After a speech of Prince Philippe of Belgium the show finally started. The show itself was good, really nice costumes and very well done. Since both French and Dutch/Flemish speaking members were in the stadium, the whole show was music only … and it was clear even without any talking! 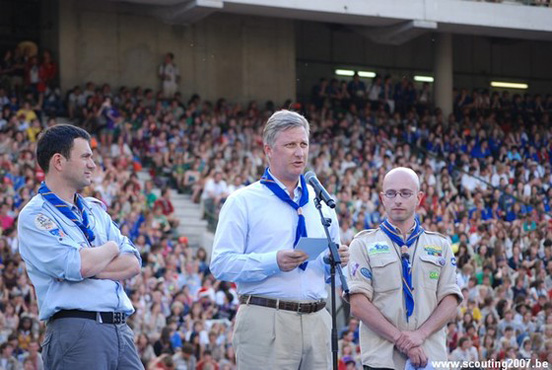 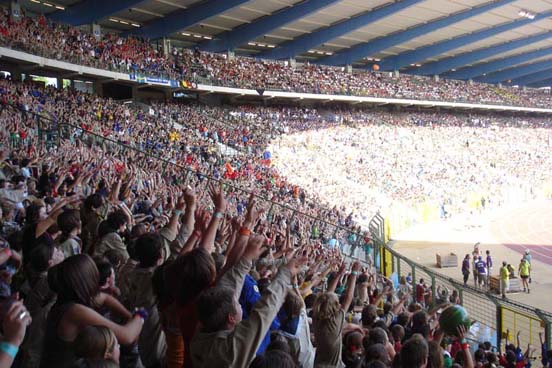 The Stadium filled with Scouts 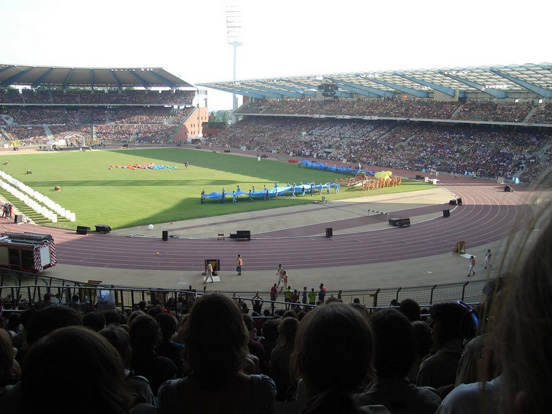 After the show I jumped into the car, headed to Deinze to take a quick shower and head to the train station to welcome our members who all got back from Brussels at around 9PM. By 11PM all bags were claimed by our members (we only lost one, still searching for it in other groups from Gouw Gent) and I could hit the sack as it had been a very long weekend.

Must say that the organization of the whole weekend was extremely well done, both the Gouw part, as the JAMbe part (Annelies & Annelies from Gouw Gent have been preparing this for about 2 years by now!). Hey, it’s not every day 93.000 members meet in one place. Props to all who helped! A job well done!

Next up in the 100 years of Scouting celebration is Scouting Sunrise on August 1st. All members of all scouts are invited on the highest point of their country to watch the sunrise … see you there?