The day started quite roughly with a headache from here to Tokyo. Although I didn’t do anything special last night (read: alcohol) it was there and quite heavy. I only went to the movie theater the night before (“Hannibal Rising”) and got home quite early … maybe the headache was a sign?

And yes, it was a sign as I found out about fifteen minutes later. Whilst cruising to work on the mental autopilot and taking in a rather slow car I noticed a white vehicle parked in a rather odd angle on the right curb. “Hmmz, could that be a poli..” *FLASH*. 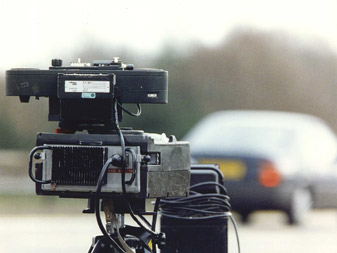 Frick on a stick! After a year and a half of driving without any tickets they caught me speeding … and just at the moment whilst taking in a car!

Several meters further I saw a cop jump on the road holding up his hand and was told to pull over.

After that he handed me a card with the rates on and I was allowed to go. Whilst looking at those rates I noticed I was rather lucky … had the cop car stood 20 meters further I surely would have been caught driving 110 or more. When driving 40 km/h faster than allowed, they are obliged to take away your drivers license (don’t know for how long) and send you to court.

What were you planning on doing today?

After having finally arrived at work and having our little daily speed-meeting dubbed “De Ochtendspits” I set off to finishing 3 projects by the end of the day (the end of the month you know). However, it didn’t take long for other stuff to break in … Since I have the mailing software we use installed on my pc, I got asked quite a few times to apply a fix here, do a fix there, implement that, etc. in a mailing. After each fix the mailing was sent out a test-list from whom more feedback was received mail after mail. Problem here were the special characters that didn’t get encoded properly.

Other sidetracks of the day were:

What did you do today?

At 6.30 I called it today and went home (driving a sharp 70, not 1 km/h faster) only having finished 1.5 out of the 3 projects I had to do today … a bit disappointing since I know I would have gotten there without the other shizzle; but hey, tomorrow a new day, not?