On June 8 the 10 SIGCHI Conference, entitled “The Web and Beyond” took place in the lovely Tuschinski Theater in Amsterdam, Holland. Amongst the speakers were Jesse James Garret (Adaptive Path), Jared Spool (User Interface Egineering) and Bill Scott (Yahoo!) to talk about the thing most people dub as “Web 2.0”

After driving from Gent to Amsterdam and a small walk to the Tushinski Theater with my collegue Jared we arrived at 8.30 in front of the main entrance, queueing. Due to the high interest (623 people as we were told later) the schedule had to be shifted a bit. When entering we overheard the host of the day requesting everyone to gather in the main hall, so we quickly went further to the balcony (and forgot our coffee, d’oh!). 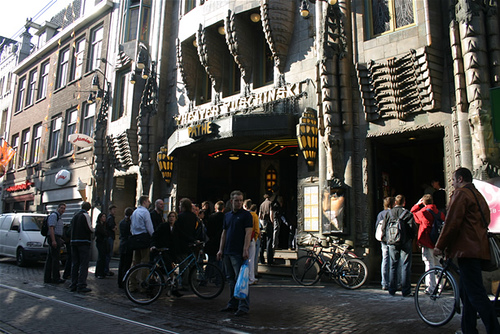 After an embarrassing intro (Keynote was “stuck” in presenter mode, thus the speaker dropped the presentation and started rattling off his speech) we finally was Jared Spool enter on stage for the first keynote “The Brave New World: Usability Challenges of Web 2.0”. In that keynote speech, Jared talked about 3 kinds of design:

On the Technology design aspect, Jared started off with the Sandisk Sansa MP3 Player. The player has it all and is in all ways superior to the iPod. Yet, only 1 person in the room knew someone who owned such a product. When asking the same about the iPod all the attendees raised their hands. So how does a superior product become so unkown? Experience. iPod has iTunes, which gives a unique user-experience: hook up your iPod, sync your (newly bought) songs and you’re off on the road with your newly purchased music. 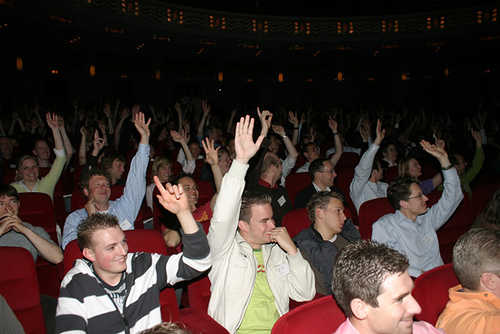 On the Feature design aspect he talked about Amazon (see above) and on Experience design Jared mentionned Web 2.0. It’s all about by joining little – loose – pieces like LEGO-blocks into creating an experience. Most common “blocks” are API, RSS, Folksonomies and Social Networking. By joining those in one way or another, an experience is created.
Still, danger is ahead whilst joining all those blocks (hence the title of the keynote):

Jared ended his keynote with “The Long Tail” and some questions could be asked. 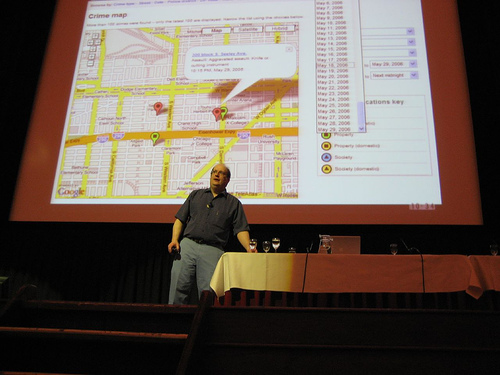 I must say that I really enjoyed this keynote. Jared is a great speaker, and one could really see that he has spoken to a crowd before. Really smooth and genuine … and even hilarious at some times! Jared’s remote went dead after about 1 minute … after investigating it a bit he gave notice: “ooh, it’s a battery problem”. Immediately the sound engineer ran towards the stage asking for the remote. “If you have double A’s I’ll take ‘m … and a sigar“. Or when he first got on stage: “Let me just move this water here, it’s not mine. Those 3 over there are. … Two of them are water“. A very entertaining and interesting presentation if you’d ask me!

The Frontiers of User Experience

The second keynote was given by Jesse James Garret aka “the AJAX dude”. He kicked off with “User Research” and how to do. Forget all about telephone research and other methods, going on location (viz. Field Research) is the way to do it. By this you can keep the user in his own environment, with all the artifacts belonging to that evironment which play a big part in the whole experience. Above that it is even cheaper/as expensive as the other methods of researching! Oh yeah preferably go in by teams of 2: one facilitator, one notetaker/videographer. 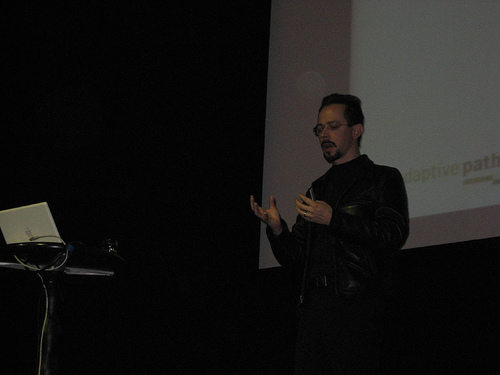 Jesse continued with the phenomenon dubbed “tagging”. It is great: the user has control, many-to-many relations and categories are not mutually excl.
Still, “there is no such thing as magic”:

And then Jesse talked about what made him even more famous than he already was: AJAX.

A not that interactive presentation, yet interesting and a real joy to watch Jesse speak. Kudos on the nice leather jacket by the way 😉

After lunch, Jared and I went to see Joost Willemsem (Backbase), Onno Bakker (eMessenger) and Yohan Creemers (Ylab) talk about what everyone names “Web 2.0”. Not that this presentation would bring any news to me, but I thought it would be interesting … Well, it wasn’t.

The intro really was great, by Yohan Creemers:

So then the dude from Backbase came to talk and he merely showed a demo of something they are building. It was an online booking travel thing, by which he explained the non-linearity of Single Page Interfaces. And then … well, that was it for that part. Next!

The dude from eMessenger came to the microphone and compared eMessenger version 3 (HTML + Javascript) with version 4 (HTML + AJAX) and said that it isn’t faster, but that the user experiences it as such. And … that was it.

When asked a question on “how would you fix the back browser button issue?” the dude from eMessenger said something good, but the didn’t know the was right on top of it: “we took away the button”. “Okay, but how do you… ” – “I’m not qualified to answer that”.

I expected more from this session! Yohan gave a real nice kickoff and the two others just flushed it down the drain by presenting their product … *sigh*

The next generation of User Interface Patterns

Martijn kicked off the session stating that the conference was wrongfully named. Since most UIP’s merely are a renamed version of an already existing UIP: “autocomplete” (2006) has already been identified by him as “continious filter” (2000), to describe the autocompletion of typed in URLs in the address bar of your browser. So instead of naming the conference “The Web and Beyond”, he suggested “The Web and Back!”.

Bill mentionned many patterns, bundled in nicely formed groups and strengthened Martijn’s statement: todays patterens are “twists on existing stuff […] placed in a new context“. Be sure to check http://www.yuiblog.com/ too.

Bill also did a request to other pattern designers : let’s group up and structurize this all into one format. Hope they’ve heard it. 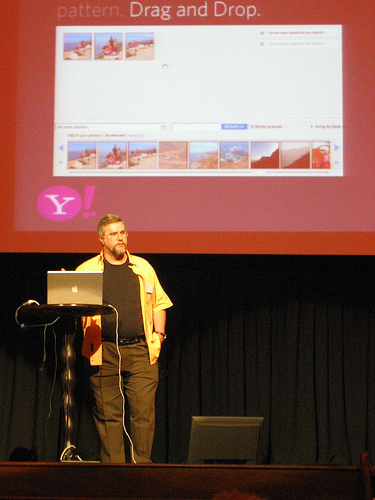 Yet another good session in my opinion. And there’s something fascination about Bill. Is is the fact that he keeps his hand in his pocket, or his Gordon Freeman look? Maybe it’s just his charisma, bundled with his knowledge.

Steven Pemberton is a living legend! If you know what he has done in the past (and still is doing), you’d be so amazed! The title of his Keynote (number 3 of the day) was well picked, since he talked about the future of the web. Just check out his presentation slides, you’ll be amazed! 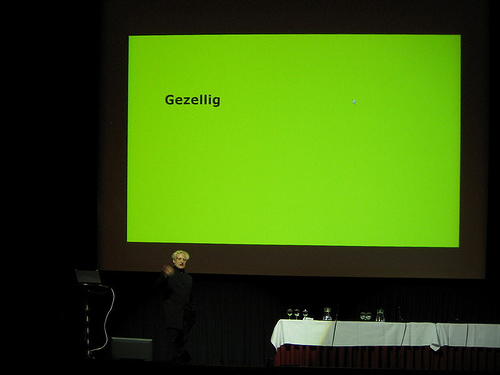 One word for this beautiful presentation: Gezellig! 😉 If you ever have the chance of seeing this genius speak, please do. He’s funny, intellingent and easy to listen to!

The day ended with a panel discussion with Steven Pemberton, Jared Spool, an unknown lady replacing Jesse James Garret who had to catch his plane and the host, Jeroen Van Erp. Not that a great talk, due to many odd and utterly stupid questions… 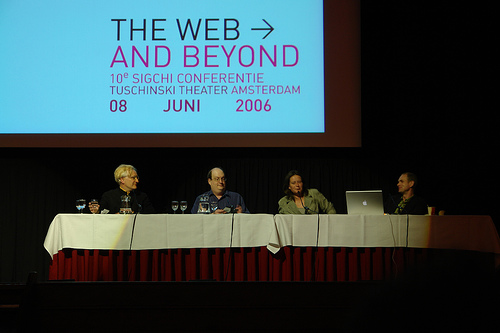 At the end of the day…

… we drove back to Gent with a big load interpretations on things. For me, TWAB was good, but could have been better with a real hands-on session. Still, I’m glad to have seen Jesse, Jared, Bill and Steven speaking. They’re great speakers and really are worth their position within the webworld. Be sure to check out Jared’s writeup too (in Dutch tough)
Really got hooked to this conference thing, too bad I didn’t sign up for @media2006, were so many great speakers were scheduled.

Oh, in case you were wondering, pics from flickr: official pics and pics tagged with twab2006 … even Jared and I got snapped: I’m in yellow, Jared on the left, Bert (Dextrose) on the right, Rogier (Roger/Teacher) a bit more on the right (with hat) and Hans Olo between Teacher & Bert 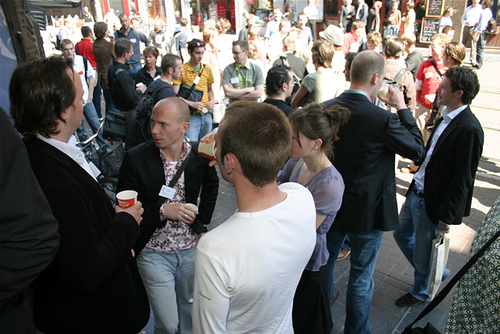 One reply on “My Web and Beyond”