Exactly one year ago I came back from visiting the States for 11 days … since I planned on adding some old content to the new bram.us I found it rather symbolic to add this one today, one year after the facts

I entitled it “My States Visit” since it actually is my reflection on one of the best holidays I ever had. Now – one year later – I (and so is Izzy) still dream off back to the swamp and other amazing stuff/places/people that we encountered whilst being there. 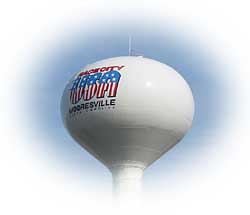 Last week Izzy bought some SkypeCredit and we called The Bailies since it’s been a long time since we’ve heard from them (and they from us *blush*). All still is going fine over there at Mooresville and we miss ‘m real hard. They’re planning on coming over to Belgium this summer, but that’s all “just plans”, nothing really planned though…

To wonder off on this SkypeCredit: it rocks! For like 0.02 Euro (yes, that’s 2ct!) you can call one minute to a landline in the States … now ain’t that amazing?

Aah Mooresville, has it been a year already? Too bad flying to and fro’ there isn’t that cheap (Izzy flew for only 350 back and forth, now it’s way up to 800!) or otherwise I would have returned by now!

Anywho, here’s the link to the original “My States Visit” 😉