On March 7 Izzy, Morrie, Matthi & I went out to see the Seattle based Indie Rockband named Death Cab For Cutie, in the AB in Brussels.

Let me kick off with stating that I’m a huge DCFC fan. Kinda know (most of) the lyrics by heart and I just keep listening to them on very regular basis, not to say daily/weekly.

If you don’t know who or what DCFC is, then I suggest you start reading up and give the DCFC site a visit … the music they produce is just perfect. Is it the high pitched voice, are it the instrumental intermezzos (along with its buildup), are it the swifts in tempo, are it the varied lyrics, or something else that does it? For me, it’s all of the previously mentionned, a combination well done. 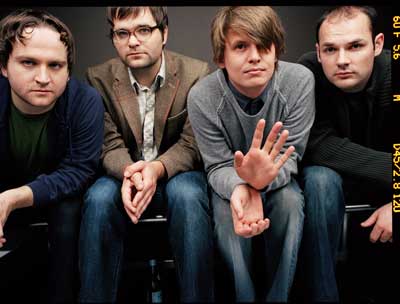 Anywho, back to the concert … or not? The funniest part of “me being a fan” is that I’ve known DCFC for only a year … yes, that ain’t no typo … 1 year.

However, I was (and still am) addicted to The Postal Service for quite some time longer (once heard “The District Sleeps Alone Tonight” on the radio and got hooked to it), which is a Poppy/Electronic collaboration of Ben Gibbard (the lead singer of DCFC) and Dntel mastermind Jimmy Tamborello (aka James Figurine). As you might have read that previous sentence you’ll notice that it’s all connected : BG (DCFC) + DNTEL (aka JT/JF) = TPS … so the fact of me liking DCFC isn’t quite a surprise since I was hooked to TPS before I even heard of DCFC.

So anywho, there we were, on our way to Brussels … after meeting up with Wio and Hendrik from “de portables” (not only the best indie/postrockband from Belgium, but also funny dudes and ex-teachers of mine (at least Wio & Hans are, not Hendrik)) we entered the AB and the concert kicked in.

Gibbard and his crew opened the show with – quite evidently – “The Marching Bands of Manhatten” (from the new CD, Plans (2005)) and “The New Year” (from Transatlanticism (2003)) and the mood kicked in … excellent sounds, high pitched voice, etc. It was all there to lift the show up … 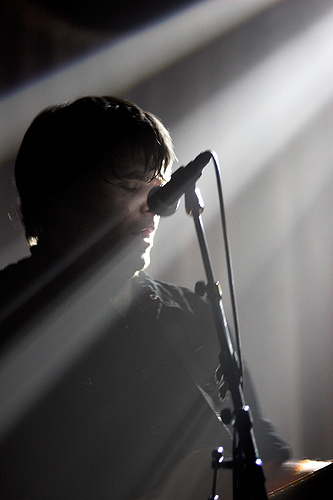 After the excellent “We laugh indoors” (from The Photo Album (2001)), Gibbard took a drumstick and started tapping a small drumhead … the sweet melody of “Title And Registration” kicked in … Bramus.dreaming.off.

After that I kinda lost track of what was being played, but it was a fine mixture of old and new songs … heck, they even played classics like “Why’d you want to live here” (2001), “President Of What?” (1998), “For What Reason” (2000) & “We Looked like Giants” (2003)! Of course some excellent new tracks like “Different names for the same thing”, “Crooked Teeth” & “Brothers on a hotel bed” made it to the playlist of the evening …

As encore, Gibbard kicked in … solo! The lights dimmed, and there he was – in all his glory – sitting on his barstool with his guitar, kicking off with an acoustic sound … yes, it was time for the more than excellent “I will follow you into the dark”! The fact that nearly everyone was singing along once proved again how strong this is. 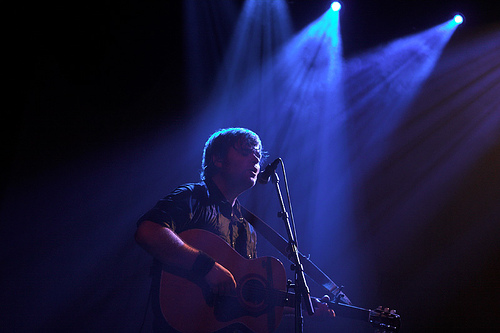 Wow, that was awesome! After this excellent solo-performance the whole band got back on the stage and performed two more songs, ending with the kick-ass “Transatlanticism” (“I need you so much closer”). *punch!*

To sum it all up, I was quite happy with the performance of that evening … the sound and choice of songs was perfect. However, the show itself could improve a bit. During the whole show the band stood there on stage, doing their thing. Gibbard sometimes changed instruments and took an other position on stage, but that kinda was it. The lights during the show were quite “standard” too: some blue, some white flashes, and … well, that was it.

But as the song “Therapy” from “D2 feat. Dan Diamond” states: “I don’t go to a club for the fire that’s coming out of the walls. Fuck al that! I’m not there to be in the VIP area and drink fancy fucking champagne. Naah, I’m nog going for none of those reasons you know … I’m just going for the music.”; some wise words, even for a deep house song 😉

Of yeah, be sure to check out DeathCabForCutie.Com each monday, since they weekly release a new episode of “Directions – 11 short films inspired by Plans” by which you can discover some tracks from Plans, powered by a nice videoclip.

Now, where is that long awaited new release from The Postal Service?

Oh yeah, in case you were wondering where the title of this post comes from. It is taken from the awesome “Title & Registration” (from the album Transatlanticism). In that track, Gibbard sings “The glove compartment is inaccurately named, and everybody knows it cos’ behind its door there’s nothing to keep my fingers warm; all I find are souvernirs from better times.”